Deutsche Welle: Mr. Dzihic, on Thursday evening (December 15, 2022) the European Union decided to grant Bosnia and Herzegovina the status of an EU candidate state. The country has been waiting for this for many years. Why now?

What does this mean for Bosnia and Herzegovina in concrete terms?

This will not change much for Bosnia. The country is not getting any more money and EU integration will not accelerate. The EU just says we’re flying the flag here in the region. A symbolic political gesture opening an opportunity for Bosnia and Herzegovina. Not more but also not less.

Doesn’t the decision come too late?

Bosnia doesn’t actually deserve candidate status. The ethno-politicians on all three sides in the country, i.e. the Bosniaks, Serbs and Croats, have done nothing with the reforms for years and have even sabotaged the EU integration process in some cases, especially the leading politicians in the Republic of Srpska.

Nevertheless, it was an overdue decision by the EU. EU accession negotiations have also started with other countries in the region, without much progress being made there. Serbia is the best example of this.

The euphoria of the Bosnian public about this decision is limited. How do you explain that?

I think it has to do with the long wait. Basically, Bosnia and Herzegovina has been waiting for EU integration steps for 20 years, and almost nothing has happened. I think that a lot of people have lost the illusion of seeing their country in the EU in the foreseeable future.

Most of them are certainly very disillusioned, above all with the sluggish development in their own country and the inaction of local politicians, but also with the lengthy process of EU integration. They then decide in their own personal way by leaving the country and emigrating to EU countries.

Do you still see any political ambition in Bosnian politics to work towards EU accession? Or do you rather let the whole thing simmer on a low flame?

A few months ago I would have seen it the same way. But now, after the October 2022 election, it looks as if there will be some movement in Bosnian politics. One sign of this is the coalition that is currently being formed, consisting of eight parties or political forces, which has set itself the goal of working programmatically. This coalition also breaks the longstanding dominance of the SDA, the dominant ethno-national political force of the Bosniaks, and this is an important step.

However, the ethno-national parties of the Croats and Serbs, HDZ and SNSD, are also represented in the coalition. In any case, there is an attempt in this coalition to anchor EU integration very prominently as a key programmatic goal of the government for the next four years. That means there is a declaration of intent to really move forward, which has not been the case with governments in recent years.

I see things moving. However, it remains to be seen what the coming years will bring in practice. I think there is cause for skeptical, mild optimism.

Since 2016, Bosnia has had to fulfill fourteen specific reform points in order to obtain EU candidate status. It didn’t fulfill any of them. What are the main shortcomings?

The most important, in my view, is that there is no central coordination and cooperation mechanism for EU integration. You have to keep in mind that Bosnia and Herzegovina is an extremely complicated state with numerous levels of government and a lot of powers at all administrative levels. Therefore such a mechanism is needed. And there isn’t.

The second important point is that in practice there have been very few reforms in the judiciary and in the fight against corruption. That has to be a focus. A third is the reform of the Bosnian constitution. The Bosnian state is currently dominated by three nations – Bosniaks, Serbs and Croats. For example, all those who declare themselves to be different or who do not want to define themselves ethnically are excluded from election to the three-person state presidency.

Judgments by the European Court of Human Rights have declared this illegal. Roughly speaking, constitutional reform is about turning Bosnia from an ethno to a civil state.

In view of this record, is it a good signal to send the country EU candidate status?

I think the main point of this question is not to say that we will negotiate from this point in time, but to say what the EU can offer the region in general. For example, there were considerations of a common internal market with the Western Balkans region, with subsequent EU accession. All in all, it is about finding a new logic for the enlargement process.

So far we have only seen the old logic, i.e. that of an enlargement process as a paper tiger. The new logic would be to see what conditions can be created so that the Western Balkans can get back on course for reform.

Keyword paper tiger. Interest in Bosnia and Herzegovina in the EU has tended towards zero in recent years. Do you see a turning point with the current decision?

I believe that in the new geopolitical situation that we have been in since the Russian war against Ukraine, people in the EU can see quite clearly that the question of integrating the Western Balkans has become a geopolitical issue and one of Europe’s security interests. I think it is now also clear that the Russian influence in the Western Balkans region must be put a stop to.

So has a kind of turning point arrived in the EU?

That’s the big question. In any case, the decision to grant candidate status to Ukraine and the Republic of Moldova meant that from now on we will act differently. It is still unclear what the concrete consequences of this will be. However, I think that in this new situation the EU must find a different approach to the region.

Above all, it must no longer fall into the stability trap and only negotiate with the strong, authoritarian men in the region. It must also address actors other than those from the traditional political elites, it must also increasingly address citizens’ movements and civil activists and forge new democratic and pro-European alliances.

Vedran Dzihic is Senior Researcher at the Austrian Institute for International Politics, teaches at the University of Vienna and at the University of Applied Arts Vienna. He heads the Center of Advanced Studies Southeastern Europe at the University of Rijeka and is a member of the Balkans in Europe Policy Advisory Group. Dzihic is the author of numerous books and publications and is active in political consulting and in public debates.

The original of this article “”A turning point in European politics?”” comes from Deutsche Welle. 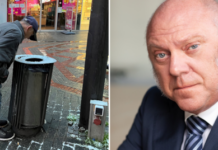