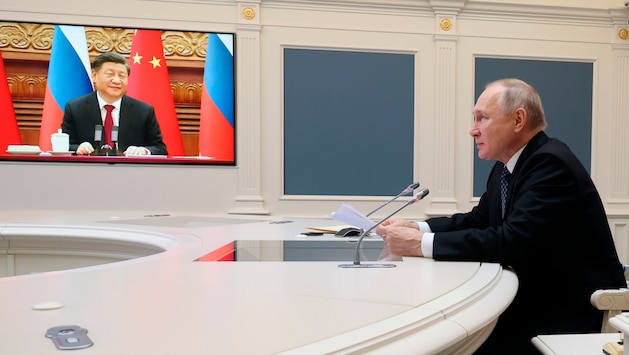 According to Ukrainian reports, 25 torture chambers were discovered in the liberated Kharkiv. The head of the regional police described the detention conditions of civilians as “inhuman”. Putin’s decree for 137,000 additional soldiers has come into effect. All news about the Ukraine war can be found in the Newsticker.

6:38 a.m .: After the Ukrainian attack on a Russian military accommodation in Makiivka, criticism of the Russian military leadership is great, which in turn is trying to shift the blame. This is what analysts at the Institute for the Study of War describe. According to its armed forces, Ukraine killed 400 soldiers and wounded 300 soldiers in the attack. The Russian Defense Ministry confirmed the Himar strike and claimed that four of the six missiles killed 63 Russian soldiers. According to Russian sources, Russian President Putin has ordered the military and investigative committee to investigate the incident by January 6.

DNR law enforcement officials told Russian authorities that Russian soldiers used personal cell phones, which gave Ukrainian forces the opportunity to conduct a precision attack on the base. Kremlin-affiliated media and some milbloggers echoed the claim, urging the Kremlin to introduce stricter guidelines on cell phone use. A former Russian officer claimed Russian forces stored ammunition in the school’s basement, which made the devastating attack possible.

The Russian Defense Ministry is now trying to pin the blame on Donetsk People’s Republic (DNR) officials, ISW said. Deputy Interior Minister of the Luhansk People’s Republic Vitaly Kiselyov reinforced Milblogger reports that military commanders are calling for the resignation of DNR chief Denis Pushilin. Some DNR officials also called for punishment of the official who decided to use the school. “The Russian Ministry of Defense may have intentionally relied on DNR officials to blame the mobilized soldiers for the attack in order to portray the DNR as the responsible party,” the ISW said.

Tuesday, January 03, 2023, 02:57: The next EU-Ukraine summit will take place on February 3 in the Ukrainian capital of Kyiv. As the Ukrainian Presidential Office announced on Monday, President Volodymyr Zelenskyj spoke to EU Commission President Ursula von der Leyen in a telephone call about plans for further financial and military support from the EU. They had agreed to intensify preparations for the February 3 meeting.

In December, the EU heads of state and government approved new financial aid for Ukraine amounting to up to 18 billion euros. The money will be used to finance hospitals and schools, among other things. It is to flow in the form of heavily discounted loans in monthly tranches of 1.5 billion euros each.

9:38 p.m .: In view of the repeated Russian drone attacks on Ukrainian cities in the past few days, Ukraine’s President Volodymyr Zelenskyj warns of a possible war of attrition. “We have information that Russia is planning a long-term attack by Shahed drones,” said Zelenskyy in his daily video address on Monday evening. Russia wants to achieve wear and tear with it. “The exhaustion of our people, our air defenses, our energy,” he said. “But we must and will do everything we can to ensure that this goal of the terrorists fails like all the others.”

“Only two days have passed since the beginning of the year,” said Zelenskyy. “And already the number of drones shot down over Ukraine is over 80.” The Russian military mainly use the drones against Ukrainian cities in order to cause as much damage as possible to the energy network there.

7:10 p.m .: Since the liberation of the area around the eastern Ukrainian city of Kharkiv from Russian occupation, the police say they have discovered 25 torture camps there. In the camps, among other things, Russian troops held and tortured civilians under inhumane conditions, regional police chief Volodymyr Tymoshko said on Facebook on Monday. Some of the prisoners were given electric shocks, others had their fingers broken.

The area around Kharkiv had been occupied by Russian troops for months. They only withdrew in early September after a Ukrainian counter-offensive. Since then, 920 bodies of civilians, including 25 children, have been discovered in the liberated region, Tymoschko said. They were killed by Russian soldiers.

According to investigations by the Ukrainian authorities so far, Russian armed forces have also committed war crimes in other occupied territories. After the withdrawal of Russian units from the Kiev suburb of Bucha, the bodies of more than 400 people were discovered there. Most of them had died violent deaths. The investigations are ongoing.

6:17 p.m .: According to an expert, the Russian attacks with so-called kamikaze drones on targets in Ukraine are deliberately carried out at night and along the Dnipro River. “Logically, not everything is visible in the sky at night,” Colonel Vladislav Zelesnyov told the Ukrainian agency RBK-Ukraina on Monday. The flight route from the south along the Dnipro was also chosen in order to avoid the Ukrainian air defenses if possible.

4:24 p.m .: Ukraine has killed dozens of Russian soldiers in an airstrike at a shelter in Russian-held Donbass. The Russian Ministry of Defense confirmed this on Monday and spoke of 63 deaths. The Ukrainian military even reported 400 dead and 300 injured. Russia, for its part, once again fired on Ukraine with drones. NATO Secretary General Jens Stoltenberg expects the war to drag on and has called for western arms production to be expanded. However, military experts also believe that a ceasefire is possible this year.

It was very unusual for Moscow to confirm the many soldiers killed after the Ukrainian attack on the town of Makiivka (Russian: Makeyevka) in the Donbass. It was the highest number of deaths reported by Russia in one place in the war of aggression that has been going on since February. The number is still considered by many to be too low.

Ukraine launched a missile attack on New Year’s Eve. According to media reports, those killed were reservists who were called up as part of the partial mobilization ordered by Kremlin chief Vladimir Putin. They are said to have gathered in the building for a New Year’s celebration. Images and a video of the remains of a completely collapsed building could be seen on social networks. More dead and injured were suspected under the rubble.

Monday, January 2, 8:28 a.m.: Russia has attacked Ukraine with combat drones for the fifth night in a row. In the capital Kyiv, Mayor Vitali Klitschko announced on Monday morning that energy infrastructure had been damaged in the attacks. There are power outages in the city, which also affected the heat supply, he said. The water supply is running normally. The Ukrainian air defense announced that a total of 43 drones and one missile had been shot down. According to reports, 22 drones were shot down in Kyiv alone.

Mayor Klitschko also said that after an explosion in a neighborhood, a 19-year-old boy had to be hospitalized with injuries. A house there had been hit during a Russian attack.

On the night of Monday there was another air alert in many parts of Ukraine. For days, Russia has been increasingly attacking at night with Iranian-type Shahed-136 kamikaze combat drones. Russian military bloggers reported that in addition to Kyiv, the Poltava, Kharkiv, Donetsk, Dnipropetrovsk, Mykolaiv and Kherson regions were affected. The massive attacks with combat drones began on Thursday.

Russia has also repeatedly reported drone attacks from the Ukrainian side. According to Governor Alexander Bogomas, the energy infrastructure was hit on Monday in the Bryansk region near the Russian border. As a result, the power went out in one place. There were no injuries, Bogomas said.