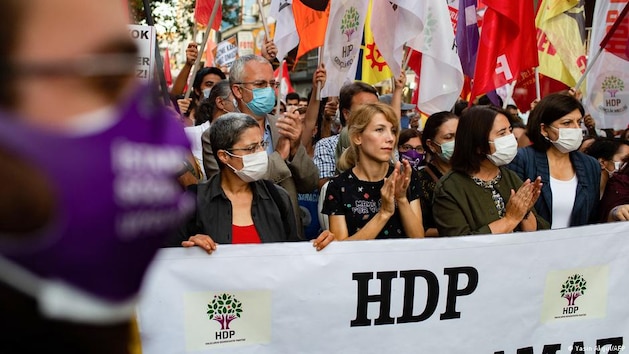 Turkey’s constitutional court temporarily blocked the bank accounts of the pro-Kurdish Peoples’ Democratic Party (HDP) on Thursday. In one month a decision will be made as to whether the party will be permanently denied access to its funds.

Proceedings to ban the HDP have been going on in Turkey for a year and a half. Analysts suspect the ruling party of President Recep Tayyip Erdogan to be behind it. In the indictment, the attorney general accuses the party of separatism and links to terrorism, among other things.

The party, in turn, accuses the court of complying with the government’s wishes: “This decision is intended to prevent fair and democratic elections and to ignore the will of the voters. This decision will not prevent the government from losing and we win all the more!”, the HDP shared on Twitter.

State funds are vital for all Turkish parties. The deputy HDP chairman Tayip Temel had already stated before the decision was announced that this would amount to a ban on the party. The HDP would be banned “before the banning process has even come to an end.” Now his concern seems to have come true. The court decision is therefore eagerly awaited.

“The Turkish judiciary has become highly partisan, so the decision must have been made at the top of the political regime,” says Turkish political scientist Berk Esen of Istanbul’s Sabanci University.

“If the party is banned in the next few months, that wouldn’t be an anomaly,” says Esen. Kurdish politics has been subject to state pressure for decades. “Kurdish politicians have experienced persecution, lengthy court proceedings, many have gone to prison,” said Esen.

Between 1990 and 2009, seven pro-Kurdish parties were banned on constitutional grounds. They were then always re-established under a new name.

After the 2019 local elections, many democratically elected mayors in Kurdish cities were dismissed on allegations of terrorism and replaced by receivers. One of the most prominent detainees in Turkey is Selahattin Demirtas. The former co-chair of the HDP has been in prison for six years, but is still considered one of Turkey’s most influential politicians.

As late as the 2000s, numerous Kurds supported the AKP. As part of the ruling party’s democratization agenda, Kurds have been granted many rights, including the right to education in the Kurdish language and access to Kurdish-language media.

At that time, people no longer spoke of the “Kurdish question”, but of a “solution process”. “During the first years of the AKP government, there was a relative tolerance towards the Kurdish political opposition,” Esen analyses.

The turning point came in 2015, when the HDP won more than 13 percent of the votes in the elections, causing the AKP to lose its parliamentary majority. Erdogan then decided to form a coalition with the Nationalist Movement Party (MHP). To this day, the Islamist-nationalist alliance has a decisive influence on politics in the country.

In the same year, the government blamed the HDP for a series of attacks claimed by an alleged Kurdish terrorist group known as TAK, which the general public in Turkey had never heard of before and which has not resurfaced since. Since then, the Turkish government has pursued an increasingly nationalistic discourse.

Turkey is now heading for critical elections. Officially, the presidential and parliamentary elections are to take place on June 18 at the latest. The Kurdish voices play an essential role in this. According to different estimates, the Kurdish population makes up around 15 to 20 percent of the electorate in Turkey.

However, the HDP does not officially belong to the so-called “table of six” of the opposition: Working openly with Kurds is still considered taboo in Turkey.

Forecasts assume that long-term President Erdogan could actually lose the upcoming presidential election. The Kurdish votes – after all, almost a fifth of all votes – would certainly not go to Erdogan this time, Esen suspects.

“Most likely they will choose the challenger. He knows that very well. That’s why he’s trying to convince as many Kurdish voters as possible not to vote at all.” The banning proceedings against the HDP are part of this strategy.

However, it is questionable whether this calculation will work: In a recently published article, the Kurdish politician Demirtas encouraged the opposition to nominate a single candidate from prison. It would be a “tragedy” if that didn’t happen, Demirtas wrote.

Esen predicts that Kurdish voters will largely vote for this rival candidate: “Many Kurdish voters are concerned about the direction in which Turkey’s political regime is headed and particularly what may happen to the HDP.”

The original of this post “No more money for the Kurdish Party HDP” comes from Deutsche Welle.