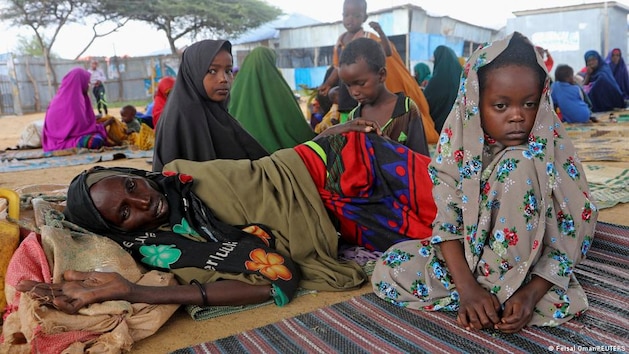 Food – wherever you look. The world’s largest agricultural fair, the Green Week in Berlin, is a place of plenty. Around 1400 exhibitors from 60 countries present their products. Everywhere someone is sizzling and cooking. Smells and aromas waft through the air, thousands of people stroll through the halls chewing.

But the Green Week is also that: 2000 international representatives from business, science, civil society and politics met in a conference building on the exhibition grounds, including 64 agriculture ministers from all over the world. At the invitation of the Federal Ministry of Agriculture, they discussed the opposite of what can be seen in the surrounding exhibition halls at the Global Forum for Food and Agriculture (GFFA) and at a conference of agricultural ministers: About hunger.

“Transforming Food Systems – A Response to Multiple Crises” was the topic. At the start of the conference, apocalyptic images flickered across a large screen: burning forests and flooded landscapes, withered corn plants and starving people. Scenes from the corona pandemic were shown and from the war in Ukraine.

“The crises exacerbate each other,” states Federal Minister of Agriculture Cem Özdemir (Greens). The war accelerates the downward spiral, which is already turning faster as a result of the climate crisis and the extinction of species. “Two billion people on our planet do not have sufficient access, no permanently secured access to food.”

The number of acutely hungry people has increased by 150 million to around 823 million in the past three years. Half of them live in Asia, in Africa, according to the World Bank, 282 million people are undernourished. The United Nations’ goal of ending world hunger for the majority by 2030 has never seemed further away. Previous attempts to make the global food systems more crisis-proof have largely failed. That is the unanimous opinion of all experts.

The Agriculture Commissioner of the African Union calculates that 38 countries on their continent are currently dependent on food imports. “Even before the COVID-19 pandemic, we had problems with conflicts, with terrorism, we had climate change,” says Josefa Sacko. “And that really hindered any progress in terms of feeding our population. But then came the pandemic and the Ukraine-Russia conflict.”

“Two cyclones with flooding, especially in the south of the country, hit us hard in 2022,” reported Samuel Dalitso Kawale, Minister of Agriculture of Malawi. Less was harvested and less was produced. The Southeast African country is already one of the least developed countries in the world and is highly dependent on foreign support.

“Our soil is bad,” says Kawale, but because of the climate events, his country will have to produce more on less land in the future. “Fertilizers are all well and good, but if we don’t pay attention to the soil, everything will be in vain.” Kawale wants to work to treat the soil with organic substances in a climate-neutral manner. But that takes a lot of time – which nobody has anymore.

Bangladesh’s Minister of Agriculture, Abdur Razzaque, reports on floods, drought and increasing problems with salinity. 60 percent of the soil is no longer fertile, also because agricultural land has been cultivated too intensively. Food production would have to be doubled in order to be able to feed the people of Bangladesh in the future. “We are facing major challenges,” sums up Razzaque.

The crisis in which the world finds itself will not change in the foreseeable future, says the American Jason Clay from the World Wildlife Fund (WWF), who is intensively concerned with the consequences of global food production. On the contrary, it will get worse: “Especially when we look at the forecast that between 1 and 1.5 billion people will become refugees due to climate change within the next 25 years. What does this mean for agriculture?”

The world is threatened with the biggest food crisis since the Second World War, warns the German Minister of Agriculture Özdemir. “The truth is that by 2030 there will only be eight harvests left. If the UN promise to end hunger is not to be just lip service, then the international community must also commit to doing what is necessary.”

What is missing is an internationally coordinated concept for cooperation. The UN special rapporteur on the right to food, Michael Fakhri, also complained about this in Berlin. The biggest problems are the debt crisis and the decades of standstill in the world trade system WTO. “It’s frustrating that a small number of powerful countries are blocking the ability for international coordination and cooperation.”

Governments worldwide spend 800 billion US dollars to support their agriculture. Subsidies are right and important, says World Bank Vice President for Sustainable Development, Jürgen Vögele. However, 80 percent of the money is spent incorrectly – on fertilizers, pesticides and seeds supplied by international corporations. “The subsidies will not be used to fight climate change and build resilient agriculture.”

Current agricultural and food systems are major contributors to climate change, biodiversity loss and the destruction of natural resources such as soil, forests and water. The final communiqué of the Berlin Conference of Agriculture Ministers now states: “We are committed to promoting sustainable, inclusive, efficient and resilient food systems.” It is important to achieve a variety of locally and sustainably produced food.

A lot has been done wrong in the past, admits Cem Özdemir. For example, by exporting agricultural products to Africa. “We are rightly proud of our efficient European agriculture. But reality also means that we have contributed to the fact that in parts of Africa domestic markets, for example for poultry or milk, no longer have a chance because economic prospects have been destroyed.”

Taking food security seriously means strengthening local markets in Africa and supporting self-sufficiency, said the Minister of Agriculture. “Maybe the goal in the future should be: build grain silos instead of sending grain sacks.” So far, imported wheat, rice, corn or potatoes have been the main food in countries threatened by hunger. Traditionally used plants such as cassava and local varieties of barley and millet would be much better suited. They could be grown locally because they are adapted to the temperatures.

The greatest increases in productivity can be achieved by improving the soil, says the American Jason Clay. “Don’t focus on the best producers. Focus on the worst producers. Help them get better, that has the biggest impact.” There is also a lot that can be done by reducing food loss and waste. According to estimates, it is around 40 percent worldwide.

Germany and the European Union must be more present in Africa in the future, said Agriculture Minister Özdemir after the Agriculture Ministers’ Conference in Berlin. “We must not leave the field to the authoritarian states that are active there and are trying to create new dependencies through their investments.”

In Berlin, Özdemir signed an agricultural policy partnership agreement with the African Union, in which Germany offers help for the sustainable restructuring of agriculture and the transformation of food systems. “We have no colonial intentions, we want partnership on an equal footing from friends to friends,” says Özdemir.

A point that Agriculture Commissioner Josefa Sacko finds important. In Berlin, she emphasized that her continent has a lot to offer, even if around 38 countries are currently dependent on food imports. “We could be the breadbasket of Africans. We have 60 percent uncultivated farmland, we have water, we have lakes, we have potential, and we have the youngest population on the continent.” It is time for Africans to “change the narrative.”

The original of this article “Biggest food crisis since World War II” comes from Deutsche Welle.