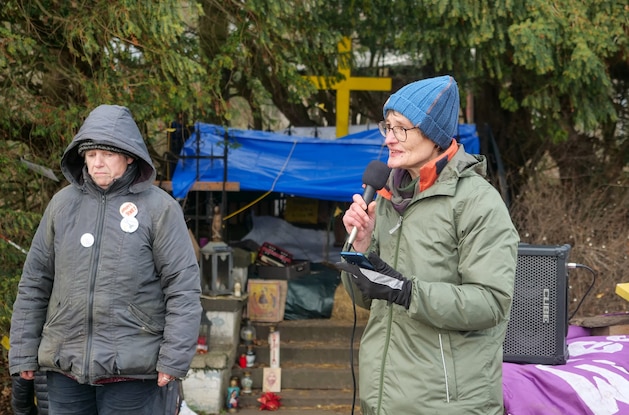 In the heterogeneous group of activists in Lützerath, a group of senior women stands out in particular: the alliance “Leave the Church in the Village” protests against the eviction of the coal village with a cross and prayers.

At the entrance to Lützerather, the small yew chapel immediately stands out. It is covered with a tarpaulin and there are numerous photos, candles or messages on the small stairs. The former sanctuary has become the spiritual contact point for the resistance against RWE, the expanded coal mining in the Rhine area and the evacuation of the village by the police.

Cornelia Senne is involved in the group “Leave the church in the village” (Kidl) which maintains the eaves chapel and organizes services here. “It’s an absolutely magical place,” she enthuses about Lützerath and the alternative structures that have emerged here in recent years: “Anyone who’s been here longer leaves as a different person. The place changed us all,” she points out.

Senne sees the yew chapel as a symbol of the diversity and breadth of the village. At first, the Christian women were also laughed at, but now it is a natural part. “We need places where creativity, a new form of community and solidarity are lived,” she says

With an anti-capitalist approach, exhibitions, events, religious fairs and its own skate hall, that’s exactly what happened in Lützerath. “That’s why it hurts so much that the place is going this way,” says Senne, looking worried at what is happening about 100 meters away: Little by little, the police are pushing the human chains on the access roads towards the village, clearing the barricades and building the tripods away. The end of Lützerath and with it the end of the band is approaching.

The Christian women don’t want to put up any particular resistance – but stay to the end. “Here is our chapel, here is our home,” she emphasizes. Therefore, it is clear for them to stand side by side with the other activists and defend the chapel. They all stand here for the preservation of creation and the preservation of life. “This has consequences for the whole world,” says Senne about coal mining.

Senne is therefore not only disappointed by politicians, especially the Greens, who supported the “coal compromise” that Lützerath is said to fall victim to. Even the local church made little effort to preserve their places of worship. Supporters even offered three times the purchase price for the 45 square meter property of the yew chapel that RWE paid for the rights of use.

The Kidl activists therefore do not feel connected to the official church. Rather, they cultivate a new ecumenism in which religious and spiritual people come together through form and language. Here they do not pray a creed and the Lord’s Prayer is followed by the request: “Call upon your good powers.” With room for contributions from participants, the services are always situation-related, so that the visitors feel involved. Around 100 people gathered at the Eibenkapelle at Christmas.

Senne himself sees the cross as a difficult symbol, since it is often equated with the negative characteristics of the official church. But: “It is a sign of suffering, liberation, hope, resurrection and community”, which is why it suits Lützerath.

The activists do not want to dismantle the cross on the chapel, which they received from supporters from Gorleben and brought more than 500 kilometers on foot. “If they want to get to Lützerath, they have to clear away the cross and tear down a sacred spot,” says Senne.

She particularly regrets that with the demolition of the village, the memories and stories would be destroyed. “The worst thing is that everything is disappearing here,” says Senne. “Even the dead are reburied,” she criticizes. This happened without an appropriate ceremony: “It’s so irreverent.”

But people would continue to carry Lützerath in their hearts, so that the place would be indestructible. “I hope this goes out into the world as a symbol that it will never happen again. That’s fundamentally wrong,” she says, before beginning a prayer on the microphone. On Tuesday evening, “Leave the Church in the Village” will hold what will probably be the last service at the Eibenkapelle.