The goal of the EU and Germany is greater independence from Russian energy supplies. This also works with gas that comes through pipelines – out of necessity since the destruction of the Nord Stream pipes. However, the situation is completely different when it comes to liquid gas: Here, Russia was able to significantly increase its deliveries to Western Europe.

Europe imported more LNG from Russia in the first nine months of this year than ever before. Seaborne imports increased by almost 40 percent between January and September this year compared to the same period last year. Around 16 percent of the imported LNG for Europe came from Russia.

In this way, the liquefied gas replaces at least part of the gas volume that Russia had previously pumped through the pipelines – above all through the Nord Stream 1 pipeline in the Baltic Sea, which has since been destroyed. There was a big minus here: 55 billion cubic meters less Russian pipeline gas flowed through the remaining pipes from January to September – this represents a reduction in the Russian share of EU imports to nine percent, said EU Commission President Ursula von der Leyen proudly in the September. The goal is to cut Russian revenue, which Putin uses to “finance his horrific war in Ukraine.” But von der Leyen has apparently made the bill without the Russian liquid gas deliveries.

Namely, to replace Russian pipeline gas, EU countries imported an additional 50 billion cubic meters of liquefied natural gas over the same period, according to the International Energy Agency (IEA). 70 percent of this comes from US suppliers, and the rest comes not least from Russia. US and British media such as Politico and the Financial Times, citing internal statistics from the EU Commission, report that the massive drop in Russian pipeline gas supplies has boosted Russian LNG exports to Europe – despite demands from politicians, Russian to reduce gas deliveries.

Boosting LNG imports is at the heart of Europe’s attempt to replace the previously dominant pipeline gas imports from Russia in the face of Russia’s war of aggression in Ukraine. Qatar was only secured as a supplier this week. However, the Arab country will only send liquefied gas to Germany from 2026 and will then account for around three percent of German consumption. Russia is also traditionally one of the major exporters of LNG. Natural gas, whether delivered by pipeline or ship, is exempt from EU sanctions against Russia.

Being in the LNG market would give Russian President Vladimir Putin the opportunity to continue weaponizing his gas and sending volatile gas prices skyrocketing, warns energy expert Anne-Sophie Corbeau of the Center for Global Energy Policy at Columbia University in the Financial Times. “One morning, Putin could say, ‘We’re stopping LNG supplies to Europe,’ forcing the continent to buy into an even more expensive spot market.”

In addition to liquid gas, pipeline gas from Russia continues to reach Western Europe. However, only in significantly smaller quantities: around 42 million cubic meters of Russian gas flow through the Ukraine to Eastern European countries every day. The fact that Ukraine receives millions in transit fees from Russia is one of the absurdities in the war between the two countries.

The article “We buy more Putin liquefied gas than ever before via Belgium” comes from WirtschaftsKurier. 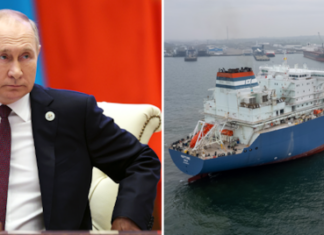 News Editor - 02/12/2022 0
The goal of the EU and Germany is greater independence from Russian energy supplies. This also works with gas that comes through pipelines –...