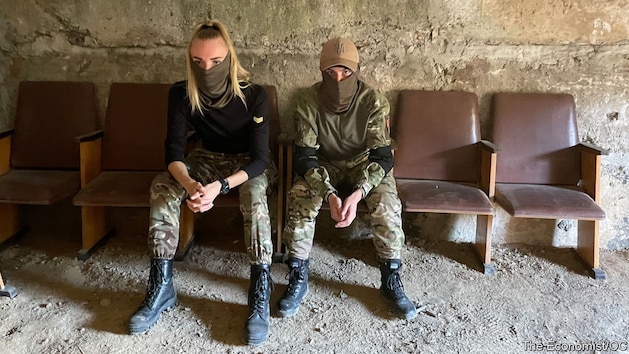 At least 30,000 women soldiers serve in the Ukrainian army. Including “Sultan” and “Phoenix”. In the fight against Putin’s troops, they are ready for the utmost.

“Sultan,” a 24-year-old with curly blonde hair and puffy lips, crouches down to retrieve an American Barrett sniper rifle from her carry case. “The love of my life,” she says as she positions the rifle for firing.

A bearded instructor behind her yells instructions: “Three targets; 186 meters distance; Killshot”. Sultan lies down, throws her ponytail back. Ra Ta Ta Ta. The bullets land inches from the target. She doesn’t seem surprised by this. “You must kill without the slightest doubt. And I have no doubts.”

Sultan – who got the name because she loves Turkish soap operas – is one of three female snipers selected by her country’s special forces for sniper training in the forests of western Ukraine. Like her colleagues “Phoenix” (resilient as a bird) and “Oksana” (a supplier called her that and the nickname stuck), Sultan has proven herself as a volunteer soldier in the territorial defense units.

But the demands on the Ukrainian front, in a male-dominated area, will be significantly higher. The first stage of training is getting used to the conditions in a wooded terrain.

The training sessions were developed by a taciturn officer with the combat name “Deputy”, the only biographical information he gives. In addition to target practice, Deputy’s classes include tactics, ballistics, and movement. Under normal circumstances, the training would take a year and a half. In the Ukraine, where the wheel of life turns faster, the women are deployed after just a few weeks. Their first place of deployment is the northern border with Belarus, where Russian forces may be preparing, or at least threatening, a second attack on Kyiv.

Also read: “No compromise on territory” – this is how Zelenskyj explains the fight against Putin

The deputy says he was initially skeptical about training women as snipers. He now believes that they are better suited to it than men. Females are light and agile, he says, and are capable of silent retreat. They are also generally more “patient” and less likely to take unnecessary risks.

But he was truly convinced when he saw women complete an extremely grueling military survival test known in professional circles as “Fizo”. From a pool of 90 candidates, only five remained at the end of the test. Two of them were men. “You can see the other three before you.”

Unlike men of military age, Ukrainian women are not prohibited from leaving the country. An initiative to extend conscription to women in strategically important jobs was due to be passed in October last year but was postponed due to a wave of popular protest. This means that women who go into battle do so voluntarily, at least for the time being. Despite this, there are more and more women in the Ukrainian army.

Most of the time, the soldiers work in the background as paramedics, press officers, cooks, secret service officers or for the delicate task of evacuating dead or injured soldiers and treating them. But a growing number of at least 5,000 women are on the front lines, many dozens of them as snipers.

The female trainees say they encountered resistance at every stage of their journey, mostly from men who believed women were generally unsuitable for the sniper profession. “We never wanted an easy life,” says Phoenix, “and we’ve always proven ourselves when it mattered.” She says she has no illusions about the dangers.

Snipers hold a special place in military psychology and, should they ever be captured, will be subjected to conspicuous treatment. The fact that they are female should hardly be an advantage. “If a sniper is captured, she is raped, humiliated, tortured and then executed,” says Oksana. “A sniper should always be prepared to blow herself up with a grenade.”

These well-known risks represent a great burden for family members. Not everyone speaks openly with their family about their work. Oksana says that when the war broke out, her mother offered her money to flee to Europe: she doesn’t seem to know that her daughter is serving in the army. Both Phoenix and Sultan are now leaving young children and ex-husbands behind.

Sultan says her eight-year-old daughter knows she is at risk of dying. “She told me that she will be sad if it happens, but that she will always keep me in her heart.” At that moment, even the cold-blooded sniper can’t hide her emotions. She shakes her head before stressing that there is no turning back now. Her child is the reason why she has to go into battle, she says. “I do everything so that your generation is not confronted with Putin and his crazy world.”

This text first appeared under the title “Ukraine’s women snipers take the fight to Putin” and was translated into German by Andrea Schleipen.

*The post “You must kill without a shadow of a doubt. And I have no doubts whatsoever” is published by The Economist. Contact the person responsible here.