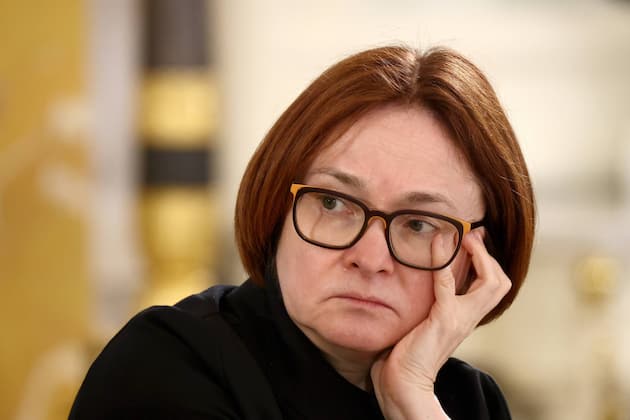 Despite Western sanctions, the economy in Russia is proving to be surprisingly stable. The Russian central bank is also behind it – and thus a woman who is financing Putin’s war, although she doesn’t want it at all.

Normally, Elvira Nabiullina shows up in colorful clothes. For some time now, the President of the Central Bank of Russia has been wearing all black. A sign of silent protest? She is considered a secret opponent of the war, but she is a key figure who makes Putin’s war possible in the first place.

The liberal Nabiullina does not voluntarily bow to the Kremlin’s course. According to the Wall Street Journal, just days after Russia’s invasion of Ukraine, the governor of the central bank asked to be fired. Russia boss Vladimir Putin declined. The details behind this are not known.

There is no question, however, that Putin’s war of aggression must have been a stab in the back for Nabiullina: for years she had fought to stabilize the Russian financial system and was recognized for this both internationally and by Putin himself. The war buries these achievements under bloody rubble.

The Russian economy is suffering from Western sanctions – but not nearly as badly as the EU and the USA had expected. The first blow against Putin, the freeze on Russia’s foreign exchange reserves worth 300 billion euros in dollar and euro terms, was only a brief triumph.

The Russian central bank was able to artificially counteract the shortage of dollars and euros. On March 7, for the first time in modern Russian history, it banned Russian citizens from selling and withdrawing dollars and euros deposited before February 24.

At the same time, it raised the key interest rate significantly to a record 20 percent. Loans became unaffordable, while deposits became extremely attractive. As a result, Russians didn’t panic about emptying their accounts.

A few months after the start of the war, imports of consumer goods such as clothing and smartphones fell sharply in Russia due to the sanctions. However, Russian exports remained at relatively high levels, as the EU could not immediately give up oil purchases from Russia, let alone Russian gas imports.

The result: a huge surplus of dollars and euros in Russia, which catapulted the national currency into the basement. If the price for one euro before the start of the war was 85 rubles, two to three weeks later one had to pay 150 rubles for one euro. However, Europe has since reduced its purchases of Russian gas and oil and the Russian central bank has cut interest rates again. As a result, the rate for one euro is currently 75 rubles.

Imports of consumer goods have also picked up speed again, which strengthens the national currency. This is done through a large number of intermediaries who sell foreign goods to Russia via detours. The system works so well that Russian citizens in the country hardly notice that they are largely cut off from large markets.

For example, in relation to credit card services such as Mastercard or Visa. Both providers ceased their activities in Russia after the beginning of the war. For example, a Russian citizen cannot buy a flight ticket on Turkish Airlines with his credit card in rubles. Through the sites like aviasales.ru. it works.

Despite external restrictions, civil administration in Russia appears to function smoothly. Schools and hospitals are open, pensions are paid as usual and all infrastructure works as it did before the war began.

The apparently normal situation in Russia is likely to crumble in the future. With the EU embargoes on Russian oil and restrictions on Russian gas exports, Russia’s revenues are falling. At the same time, the state is suffering from the ongoing costs of the war and the brain drain of hundreds of thousands of highly qualified workers.

The result is a decline in gross domestic product (GDP) and rising unemployment – Elvira Nabiullina’s life’s work will perish with Putin. It is uncertain how long she will be able to keep the Russian economy alive enough to continue financing war spending.

With every ruble saved, every financial measure, Nabiullina managed to strengthen the economy and thus mobilize resources both for the war and for the killing of Ukrainians, according to economist Sergei Guriev, professor at Sciences-Po University in Paris, the end.