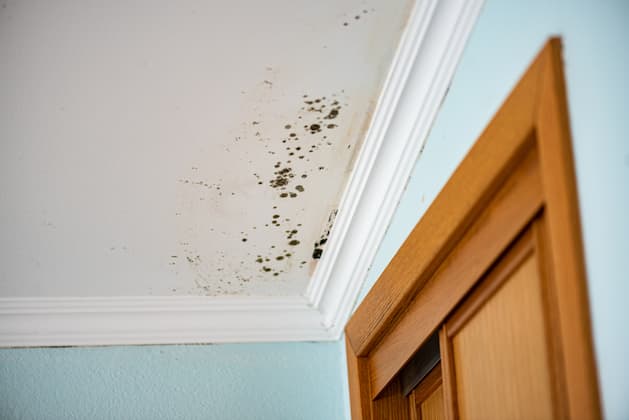 If you heat less because of the high energy costs and also ventilate less, you risk mold in your living space. It is a health hazard – and must be removed quickly and properly.

They are often the visible consequence of trying to save energy: mold stains in the home. Because those who heat little and ventilate less often create a comfortable climate for the mold thanks to the high humidity in the living rooms.

However, the risk to health is not so obvious. Because behind a few small stains on wallpaper, on joints and masonry, there can long be more. You can do this:

Clean the surface. On smooth surfaces such as glass, metal, paintwork, ceramics and plastics, a cloth with a little household cleaner is usually sufficient, according to the North Rhine-Westphalia consumer advice center. Then throw the towel away.

“You can also rub the surface with an alcohol-based disinfectant, i.e. with high-percentage alcohol of 70 or 80 percent,” says Stefan Betz, first chairman of the Federal Association for Mold Remediation. Joints and wallpaper should be removed and renewed. The consumer advice center recommends also wiping the wall with high-proof alcohol after detaching it.

You should protect yourself from the spores, i.e. wear gloves and a respiratory mask, as you know them from everyday life in a pandemic. For stains higher up, protective goggles are also useful to prevent harmful particles from getting into your eyes.

In order to keep the health risk low, Stefan Betz also advises: “If you remove wallpaper, you should always moisten it first or just dab it with an alcohol solution. Then not much mold is released when you remove it.” Important: Ventilate the room well afterwards.

It is generally advised to only tackle areas that are no more than half a square meter in size. It doesn’t have to be a contiguous spot, says Stefan Betz. Even if there are several small spots of mold in a total area of ​​50 square centimeters, experts should be consulted.

The same applies to an infestation that is visually very noticeable, for example if fluff has formed on the spots. And even if you are unsure what the cause of the mold may be, says the expert on indoor mold fungi, because: “An infestation does not necessarily have to be attributed to a ventilation fault or a room temperature that is too low. It can also arise because there is hidden water damage somewhere.”

“As a rule, the cold external components are then affected: the external walls and the corners where two external walls meet, or the area around the windows if they are poorly insulated or there are leaks there,” lists Stefan Betz.

“If, on the other hand, mold appears on an interior wall, it is more likely that there are other causes,” says the expert. About leaking pipes in the walls. If mold growth on interior walls is due to ventilation and heating, this is due to thermal bridges or the fact that the room is not heated at all.

Mold can cause allergic reactions and aggravate diseases, especially those of the respiratory tract. According to the North Rhine-Westphalia consumer advice center, people with health problems and those with a weakened immune system should avoid rooms with mold.

Mold also damages the structure of a building. In the worst case, this can lead to fungus-bearing wooden beams or the roof structure of a house being destroyed – and the building becoming uninhabitable.

Superficial removal is not sufficient in all cases. Recurring mold spots indicate that the infestation had already penetrated into deeper layers and is still sitting there. “If I don’t adapt my behavior, then the mold behaves like weeds in the garden,” says Stefan Betz. “If I only remove the surface of the dandelion, its roots can sprout again.”

This can also be the case, for example, if the wallpaper only shows a few black dots on the surface. But according to Stefan Betz, if it has become detached from the substrate, that is a sign that moisture has already dissolved the remains of the paste, and that further action is therefore required.

If you find an even worse infestation behind a wallpaper than on the front, “then there is also more depth there,” says the expert. “Then you don’t just have to remove the wallpaper, maybe even part of the plaster.”

yes for now “As soon as the moisture is no longer effective, the mold can no longer grow,” explains mold expert Stefan Betz. This also applies to an infestation in deeper layers. “So obviously the problem will decrease or disappear as the temperature increases throughout the year. But what has been created up until then is not gone, it is dormant and waiting for moisture to take effect again at some point. Similar to a seed.”

So that means: If you don’t act consistently, the problem will not just come back next winter. A mold infestation that is still present will then become even larger.