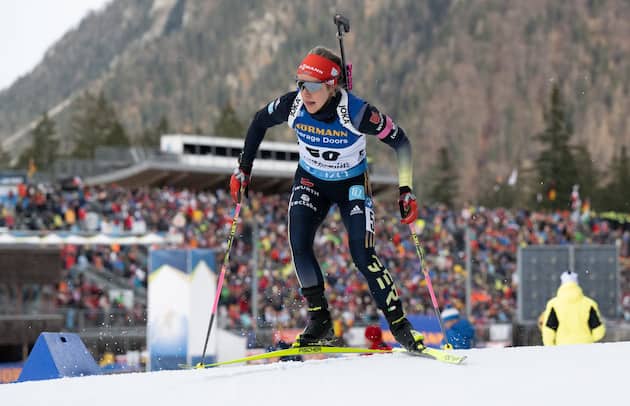 The German women fight for a podium place at the Biathlon World Cup in Ruhpolding just like the men. The Norwegians win.

Denise Herrmann-Wick first cheered thousands of euphoric fans on the home straight and then happily fell into the arms of her teammates. One day after the men, the German biathletes also gained a lot of self-confidence for the home world championships with a second place at the World Cup in Ruhpolding. The relay with Anna Weidel, Vanessa Voigt, Sophia Schneider and anchor Herrmann-Wick was only beaten by the victorious Norwegians after a total of ten spare rounds in the atmospheric Chiemgau Arena on Saturday. The gap at the finish was only 15.3 seconds. After 4×6 kilometers Italy took third place.

In front of the biggest crowd of the winter so far with 17,000 fans in the sold-out arena, the ailing Weidel didn’t get off to a good start and needed three spares in prone. The native Austrian went back on track in tenth place and after another penalty in standing was able to at least work her way into the top ten. For comparison: The German men’s relay team only needed four spare rounds on Friday and finished second in Norway’s victory.

In terms of skiing, Weidel lost a lot of time to the leading French women and had to be overtaken by Japan or Estonia before she handed over to Voigt in twelfth place, more than a minute behind. “It was much harder than I expected,” said Weidel. It was only decided on Saturday morning that she would start after not feeling well the day before. “I’m really sorry for the whole team,” said Weidel, for whom a deployment of Janina Hettich-Walz would have made “more sense” afterwards.

The Thuringian Voigt then did much better, hit all ten shots quickly and moved up to fourth place. “It’s almost as if you’re being carried,” Voigt said of the party atmosphere that inspired her. The gap to France was still a little more than a minute when Schneider went into the cross-country ski run. The prospects for the future were now much better. With the same line-up, the DSV relay had already finished second behind Sweden at the start of the season in Finland. In Austria it was enough for fourth place in December.

Five years ago, the German ski hunters last won a relay race in Ruhpolding, the last World Cup triumph ever was in January 2021 in Oberhof. An absolutely top result was not quite possible a month before the home World Championships in Oberhof (February 8th to 19th) because Schneider did well, but also blundered at the shooting range and needed a total of four extra cartridges. At the top, France initially fell far behind due to two penalties, but Norway took over the lead.

Born in Saxony, Herrmann-Wick came third in her adopted country in pursuit of the Norwegian anchor Ingrid Landmark Tandrevold, with Italy and the experienced Dorothea Wierer in between. Herrmann-Wick needed a spare in prone and initially had to let Tandrevold and Wierer go. Despite another mistake, the ex-world champion kept in touch with Wierer – and overtook quite easily on the final lap.