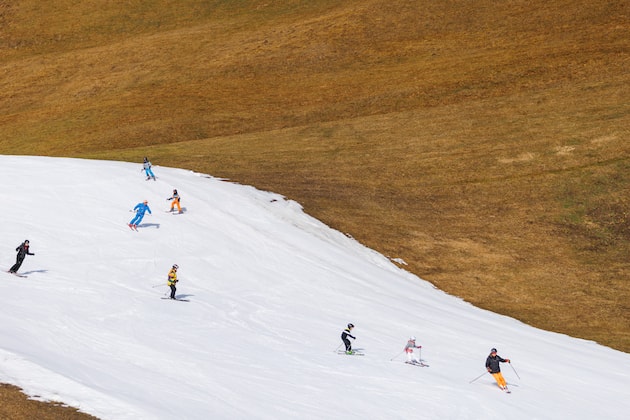 At the turn of the year there were record temperatures. There was hardly any snow this winter. Instead, the ski slopes remain green and are built with artificial snow. Why skiing is so dangerous this year.

In many winter sports areas it is currently more green than white. The temperatures are just too high. Some ski areas have to restrict operations. But after two years of Corona, skiers and snowboarders are longing for new adventures and fun on the slopes. Recently, reports of accidents have increased. Could this have something to do with the snow conditions? How should winter sports enthusiasts behave?

In Austria, 13 people have had fatal accidents on slopes in the current ski season up to January 3, according to the Austrian Alpine Safety Board (ÖKAS). Eleven died in Tyrol alone, including two young people from Germany. In many places there are only narrow artificial snow bands on the valley runs, says the President of the German Ski Instructors Association, Wolfgang Pohl, the German Press Agency. Off-piste falls are very dangerous.

Pohl says there is often not enough space for all skiers on the narrow artificial snow slopes. During the Christmas holidays in particular, the Bavarian and Tyrolean ski areas were really full. “Then it gets tight, then there are near collisions,” he says. If you dodge and then fall at high speed and fall into the non-snowed areas next to the slopes, you risk serious injuries. In the past, the ski areas were also snowed in beyond the slopes. Rocks and tree stumps can now be seen there. Anyone who falls in natural snow falls relatively softly – “now you fall extremely hard, you may collide with rocks and trees, and that is of course life-threatening”.

And: artificially produced snow is different from flakes that fall naturally from the sky, as the WSL Institute for Snow and Avalanche Research in Davos explains. Instead of snow crystals, they are small balls of ice. “As a result, technical snow is denser and harder than natural fresh snow.” If there is a lack of fresh snow, the surface also becomes harder, as ÖKAS Managing Director Matthias Knaus says. When many skiers are on the move, the little snow slides off faster in steep places. “This creates ice sheets. Anyone who has a lot of experience can confirm: It’s better to ski on natural snow, artificial snow is a bit more streamlined.”

For experienced athletes, however, the artificial snow is not a problem per se, explains Pohl: “It has a good grip and is also easy to control – as long as you have properly prepared skis.”

The weather is one thing, plus the lack of practice. Many recreational athletes took a break from skiing during the Corona years, says Knaus of the dpa. “But it has long been a general tenor that people don’t prepare as well for the ski season. In the past, you started ski training in September or October and developed good skills yourself, but today trips are much more spontaneous. Holiday behavior has changed.” The challenge is to adapt the physical condition to the project.

Good physical condition is important when skiing at 2,000 or 3,000 meters. “The oxygen saturation there is completely different,” says Knaus. 5 of the 13 dead in Austria suffered from cardiac arrest. Recreational athletes should have themselves checked before they go on vacation. “It would be best to have a performance ECG beforehand, which shows whether you are suitable for the planned sporting activity.”

But fitness alone is not enough for safety on the slopes: some winter sports enthusiasts are much too fast and do not keep enough distance from the edges of the slopes and other people. “You should always be able to stop if something unforeseen happens,” advises Pohl. He also recommends wearing a helmet and back protection. In the past, people skied better, says ÖKAS President Peter Paal, who is an anesthetist by trade. “The best Formula 1 car is of no use if the driver is bad. And when it comes to skiing, you have to say: The pilots have gotten worse,” says Paal of the APA agency.

Many fatal accidents can be attributed to your own fault, says the President of the Austrian Alpine Club, Andreas Ermacora, the broadcaster ORF Tirol. “If you go over the edge of the slope and crash into a tree, that’s very tragic, but you can’t blame the slope operator for it.” When taking risks, you have to take into account that in the event of an accident on the mountain, rescue is often not that quick and efficient such as a road accident, Knaus pointed out. “The best way to reduce your own risk of falling is with good preparation, good equipment and enough distance from others.” Wolfgang Pohl also advises this: “Keep a safe distance and reduce speed – that’s the most important thing.”