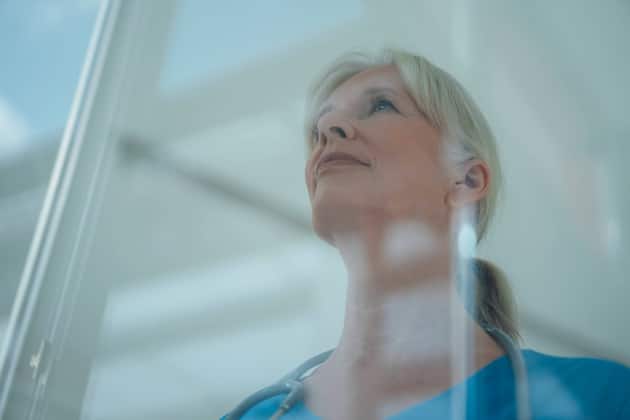 Poor in old age despite decades of employment history? Retirement hits women especially hard. The OECD social policy expert Monika Queisser explains why the situation in our neighbors in France is less dramatic and what needs to change in Germany.

Imagine you have worked hard for 40 years and more 40 hours a week and then have to make do with a monthly pension of almost 1000 euros. According to the latest figures from the Federal Ministry of Labor, this fate threatens every third woman in Germany. The parliamentary group leader of the left in the Bundestag, Dietmar Bartsch, speaks in this context of a “slide into poverty in old age”.

Around 2.7 million full-time women earn so little that their pension is precarious even if they retire regularly. With just 1000 euros a month, there is not much left for life itself in view of the constantly rising prices for housing, energy and food – at least if you are alone.

According to the Federal Ministry of Labor, women and men in Germany currently have to earn 2,844 euros gross per month for 40 years in order to receive a monthly pension of 1,000 euros; to be entitled to a 1,200-euro pension, a gross salary of 3,413 euros is required. Women are therefore disproportionately affected by low pensions.

“That’s because there are many women who earn little, even if they work full-time,” says Monika Queisser to FOCUS online. Queisser heads the department for social policy at the Organization for Economic Co-operation and Development, or OECD for short. In addition, “in Germany we have a very close link between contributions and pensions”.

Germany, according to Queisser, has made a political choice in that there is no redistribution in its pension system. Everyone gets paid according to their contributions. Conversely, this means: “Anyone who has worked full-time and receives little pension has earned little.”

One of the main reasons for the lower earnings is that, according to Queisser, women are more often active in less lucrative jobs, such as in nursing or in education, i.e. in the classic care professions. “Although these professions are so important, they are paid much less than technical professions.” In Germany as well as in the other 37 OECD countries.

In addition, women in Germany often take a long break from their full-time job to raise children and then usually return to work part-time. “That’s much less the case in France,” reports Queisser. There, women more often work full-time or close to full-time, even if they have children.

“This also has to do with the childcare options, which are much more extensive in France,” says Queisser. From the age of 3, the children are in pre-school all day. School ends at 4:30 p.m. for everyone.

In France, too, there is this close link between pension contributions and benefits. But: “France is relatively well positioned when it comes to the question of when you stop working and at what age you get a pension without deductions,” says Queisser. This is also shown by figures from the OECD from 2019.

Emmanuel Macron’s pension reform, presented last week by his Prime Minister Elisabeth Borne, plans to gradually raise the retirement age from the current 62 to 64 by 2030, much to the annoyance of the trade unions in the country. It then takes 43 years of contribution years for a pension without deductions. Anyone who achieves this should receive a minimum pension of 1,200 euros.

Back to Germany. Question to the expert: What needs to change to improve the pension situation for women? “Unfortunately, there is not one political measure that can change that,” Queisser clarifies. “In the education sector, we have to ensure that more girls are interested in technical jobs.” Because the salaries are simply higher here.

Mothers also need better support so that they can work more and have the same opportunities on the job market as men. “Because as long as women do most of the unpaid work, we won’t make any progress with equality in the labor market,” says Queisser.

No pension system on earth, not even the best, can ensure that all these inequalities in a life and work cycle are evened out. It is therefore not due to the pension system but to other factors that the pension gap between the sexes in Estonia is the smallest in comparison to all 38 OECD countries.

“In many Eastern European countries, women have always worked full-time,” emphasizes Queisser. In Germany, too, East women have higher pension points than West women. “Women’s contributory careers have been steadier.”

A shift in priorities in the education system or more optimal participation in the labor market for women – none of these are measures that will take effect immediately. But how can a 60-year-old, for example, change course so that she does not slide into poverty in old age?

“That’s not easy at an advanced age,” regrets Monika Queisser. There is no miracle solution. “Of course, that’s doubly sad, especially since poorer people also have a lower life expectancy overall,” as the pension expert emphasizes.

In Germany, there has been a basic pension since January 1, 2021, which was decided and introduced by the grand coalition. It is an individual surcharge. Pensioners who have worked long hours and have earned below average are entitled to this. According to the Federal Ministry of Labor and Social Affairs, “1.1 million pensioners benefit from the basic pension and receive an average of 86 euros more every month”.

While there is no redistribution in Germany, many countries have solved it differently. Namely, by redistributing pensions in favor of low-income earners, according to Queisser. In Germany, with the introduction of the basic pension, a redistribution element was added.

Persons who have paid contributions for 33 years and more should not fall below a certain amount. “This is certainly progress,” praises Queisser. “For everyone who has worked less, there is a means-tested basic security.” This is a form of social assistance.

In the overall view, the expenditure side must also be looked at. “In countries where home ownership is more common than in Germany, Austria and Switzerland, for example, a significant point of expenditure is eliminated in old age, namely rent,” explains Queisser. “Of course that also makes a difference.”

“In social policy, poverty correlates with how much one is willing to spend to fight it,” emphasizes Queisser. “Systems that are nationwide and in which everyone is included are good.” In Europe, for example, this is the Swiss or Dutch pension system with basic pensions that reach everyone.

“For the countries that started to build up capital early on, it is easier to continue paying good pensions if they can rely on these capital stocks,” the expert continued. These reserves do not exist in Germany or France. “In this respect, it doesn’t help to say that our system should be more like that of the Netherlands or Switzerland, because you can’t conjure up these capital stocks.”

While poverty in old age is less prevalent in these countries, South Koreans are hit hard. According to the OECD, 43.4 percent of people over the age of 65 in the Asian country are considered poor. This is also due to the pension system there or its lack.

“The pension system in South Korea is still relatively new,” reports Monika Queisser. When it was introduced, many people who had been working for a long time were left out. “There are many pensioners there who, apart from a small basic pension, have little or no entitlement from the pension insurance system.” That will improve over time. “However, the Korean system is not particularly generous.”