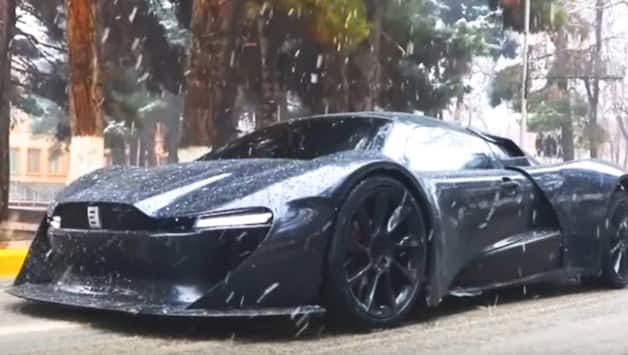 The words “Afghanistan” and “supercar” are rarely used in the same sentence, but now the war-torn country has unveiled its first dashing vehicle. Hardly anyone in the country can buy it, but the development is an important step.

The camera pans across a floor riddled with bullet casings to a young man sitting in a chair, face smeared with dust and expressionless, staring into the distance, next to a radio blaring patriotic slogans. As clouds of dust drift by, he gets up and walks slowly onto an airstrip where a covered car is parked. At the musical-dramatic climax, he pulls back the cover and reveals the jet-black Mada 9 – Afghanistan’s first super sports car.

Around 30 engineers in the country worked on the Mada 9 for five years, and now the sports car has been presented for the first time. Entop and the Afghanistan Technical Vocational Institute in the capital Kabul are responsible for the prototype shown in the film. As far as the technical data and thus the direct comparison with other super sports cars, for example from Ferrari, is concerned, the official bodies are still silent. Videos of trips with the Mada 9 have not yet been published.

All that is known so far is that the car is powered by a modified Toyota Corolla engine. Ready for series production, it delivers at least significantly less horsepower than other supercars. While the current Ferrari 296 GTB has around 830 hp, a Toyota Corolla has a maximum of 300 hp. However, Mohammad Riza Ahmadi, CEO of Entop, confirms that the engine is powerful enough for the car. In future models, however, it should be replaced by an electric variant anyway.

The images published so far do not directly suggest that the Mada 9 is designed in such a way that it can also drive off the beaten track or on poorly maintained paths. But that would make sense because Afghanistan doesn’t have a motorway network like Germany does. If so, it would not be a novelty in the sports car market. With the new Huracan, Lamborghini recently also showed a vehicle as a concept that, according to the advertising video, can also move on earth and sand.

The Taliban, who have ruled Afghanistan again since 2021, celebrate the Mada 9 as a sign of their country’s strength. Religion and modern science were promised and this is now proof of that, said Abdul Baqi Haqqani at the presentation of the car. The 62-year-old was Minister of Education until October. He lost his job after publicly criticizing the decision to ban women from universities.

Important to know: When the development of the Mada 9 began in 2018, the Taliban were not yet back in power. Of course, they now prefer to exploit the sports car all the more.

To the layman it may seem absurd that a poor country like Afghanistan should suddenly be developing a supercar. Even if the price is well below western models, hardly any people in the country can afford such a car. In addition, the development has presumably cost several million euros – money that the population lacks elsewhere.

Nevertheless, the development of such a prestige car makes sense – not only for Afghanistan. For example, 20 countries in Africa have now set up space programs and set up telescopes and launched almost 40 satellites into space. What these nations have in common with Afghanistan is that the population often suffers from hunger, the infrastructure is poor and the health system is modestly developed.

But: In the long term, super sports cars and space programs should be just as much a way out of poverty as better roads, more schools and hospitals. They serve higher education in the country, because no matter whether you want to build a sports car yourself or shoot a satellite into space, you need well-trained engineers who can carry out such projects. Prestige projects also attract young people to take an interest in such training and jobs. For example, after just a few years, Africa’s space sector now employs 10,000 people. Their work is in turn also the basis for the continued development of the continent’s digital industry.

Whether a super sports car for Afghanistan is now the optimal decision in this sense can of course be debated. The skills that engineers gain when building and developing such a car can certainly be transferred to other industries.