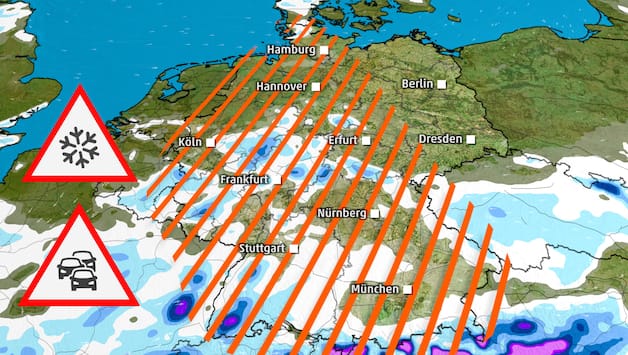 After January has been rather mild so far, winter is making its comeback. Colder North Atlantic air brings snowflakes with it and poses the risk of accidents. All current reports in the weather ticker.

Tuesday, January 17, 6:42 a.m .: The people of Hamburg and Schleswig-Holstein expect a stormy day on Tuesday. Occasionally it can get slippery on the roads. According to the German Weather Service (DWD), a storm front is moving from the German Bight to the Skagerrak, bringing cold sea air and stormy weather with it. On the North Sea and at times also on the Baltic Sea, gusts of wind of strength eight to nine will blow in the morning, and occasionally ten. It will remain stormy into the afternoon. The wind decreases inland during the day, on the coasts only on Wednesday night.

According to the information, it will rain on Tuesday morning, sometimes there will also be sleet. There can be freezing wet. The temperatures on Tuesday are at highs of around five degrees. Wednesday night will be a little drier and cold again. With a light frost and temperatures around minus two degrees, there is a risk of ice. The islands remain frost-free at temperatures between one and four degrees, as was further said.

10:06 a.m .: Heavy gusts of wind caused disruptions in train traffic and the power supply in parts of France on Monday morning. Around 75,000 households were without electricity, as network operator Enedis announced on Twitter. Most of them are therefore in the west of the country.

In the region around Paris, trains were temporarily canceled because trees had fallen on the rails. The broadcaster France Info reported with reference to the railway company SNCF that individual trains had not departed in Normandy and in the Pays de la Loire either.

Monday, January 16, 6:14 a.m .: After mild temperatures and uncomfortable weather, winter is announced at the start of the week. “The approaching cold air is finally causing winter feelings again,” said a spokeswoman for the German Weather Service (DWD) in Offenbach on Sunday. Due to the cold air, the snow line will continue to fall in the coming days.

On Monday there will already be snow above 300 to 400 meters. “Especially in the Eifel, in the Hunsrück and in the Sauerland there can be 10 to 15 centimeters of fresh snow, maybe even more in some cases,” said the spokeswoman. Snow cover could also form in the low mountain ranges. In addition, according to the DWD, rain is coming in from the west, while it remains dry in the south and south-east. In the west and in the middle, strong to stormy gusts are expected, in the southwest and in the mountains even gusts of wind. With temperatures between three and ten degrees, it is colder than in the past few days.

According to the DWD, it can loosen up in the middle and in the north on Tuesday, with snow, rain or sleet to be expected locally. The temperatures reach one to six degrees.

Meteorologists expect snow south of the Danube on Wednesday. Otherwise the weather will be cloudy and gray. Only in the north could the sun occasionally peek through.

10:39 p.m .: There was a brief storm surge warning for the German North Sea coast on Sunday evening. At around 9:45 p.m., the German Weather Service gave the all-clear. The Federal Maritime and Hydrographic Agency (BSH) had previously announced that the evening high water or night high water on the East Frisian coast in the Weser and Elbe area was expected to be 1 to 1.5 meters higher than the average high water. For the North Frisian coast, a value of about 1.5 meters higher than the mean high water was initially predicted. Mean high tide plus 1.5 meters is by definition a storm surge.

9:19 p.m .: There could be a storm surge on the German North Sea coast on Sunday evening. The Federal Maritime and Hydrographic Agency (BSH) announced this on Sunday evening and issued a warning. The evening high water or the night high water is expected to be 1 to 1.5 meters higher than the average high water on the East Frisian coast in the Weser and Elbe area.

A value of about 1.5 meters higher than the mean high water level was predicted for the North Frisian coast. Mean high tide plus 1.5 meters is by definition a storm surge.

The red alert applies to the following districts:

The meteorologists write: “For example, trees can be uprooted and roofs damaged. Pay particular attention to falling branches, tiles or objects. Close all windows and doors! Secure items outdoors! In particular, keep your distance from buildings, trees, scaffolding and high-voltage power lines. Try to avoid staying outside!”

The DWD also warns for many other districts at the third highest warning level, orange. Check the map to see what the situation is like or follow this link: German weather service warning map.

4:39 p.m .: The German weather service warns of storms with continuous rain in large parts of Germany on Saturday. The alert level is yellow in almost all of Germany, and in large parts also orange. In 14 districts there is even the second highest red alert. The following districts are affected:

Saturday, January 14, 3:54 p.m .: In view of the heavy rainfall in NRW, the German Weather Service issued a severe weather warning on Saturday. Accordingly, the water levels could rise again after a short relaxation.

The German Weather Service (DWD) issued a severe weather warning on Saturday due to the continuing rainfall in North Rhine-Westphalia. According to the most recent forecast by the DWD, rainfall of between 30 and 40 liters per square meter was expected in the congested areas of the mountainous region, and even up to 45 liters per square meter in the Bergisches Land.

A spokesman for the State Office for Nature, Environment and Consumer Protection (Lanuv) said that the predicted high levels of rain could, given the “saturated soil”, cause the water levels in the affected catchment areas of the Ruhr, Wupper or Sieg to rise again after a temporary relaxation. On the night of Friday, there were numerous fire brigade and rescue service operations due to flooding and flooded basements in Sauerland and Solingen, among other places.

According to the latest Lanuv report from Saturday afternoon, 9 out of 87 levels reported flooding, all of which were still declining at the time of the report. The level of the Lenne in Altena in the Sauerland was at information level 2, which stands for the risk of flooding of cellars, fire brigade operations and the blocking of regional transport connections.

According to the DWD, the rain initially eases off on Sunday night. Temperatures will drop into the single digits. After a stormy morning, the DWD expects the wind to decrease slightly in the afternoon on Sunday. In the night to Monday, the precipitation increases again, which turns into snow from 300 to 400 meters. At temperatures between two and four degrees and in the mountains down to minus two degrees, there is a risk of ice.

Saturday, January 14, 11:01 a.m .: The rain is receding, but the weather in Germany remains uncomfortable. “Tomorrow, Sunday, will be dominated by storm “Frederic”,” said a spokesman for the German Weather Service (DWD) in Offenbach on Saturday. In the south and east it is still raining at first, but as the day progresses the rain moves back to the foothills of the Alps and the Alps. In the higher mountains there could be the first snowflakes. In the other parts of the country, the day started with a mix of sun and clouds.

The wind and storm are expected to subside on Monday night. The snow line falls between 300 and 500 meters. “Especially in the Eifel, in the Hunsrück and in the Sauerland, there can be 10 to 15 centimeters of fresh snow, maybe even more in some cases,” said the DWD. In the lowlands it will remain mostly rainy. In the course of the week, the temperatures are expected to drop further and be at a maximum of 1 to 3 degrees. However, a snow cover will only form and last at medium and higher altitudes.

You can find more information about the weather conditions on the following pages.