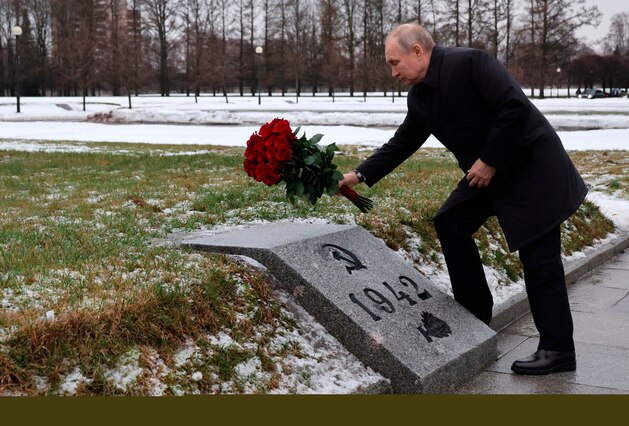 Vladimir Putin lets the next historical date pass without addressing the nation in a major speech. Instead, he prefers to repeat his favorite fairy tales about the Ukraine war. Meanwhile, Ukrainian President Zelenskyy speaks about the tragic helicopter crash. what happened tonight

Putin is letting a great opportunity pass – out of clear calculation

Many Western experts and Russian insiders were expecting Vladimir Putin to give a major speech on Wednesday. An important announcement. On the historically important day – the 80th anniversary of the breakthrough of the Nazi siege of Leningrad. Instead, Putin delivered a small speech. In this he emphasized all the stories that he has been driving for so long.

Putin’s Foreign Minister Sergey Lavrov went a step further (popular in Russian propaganda). He said that the West (i.e. the US and Europe) want to bring about a “final solution” for Russia, just as Hitler did with the Jews in World War II. He, too, stylizes the “special military operation” in Ukraine as just as vital for Russia’s survival as the fight against Hitler.

The experts at the US Institute for the Study of War (ISW) have come to the conclusion that Putin has recently deliberately let a few opportunities for a big speech slip by. He doesn’t want to make any big announcements. Instead, like a mantra, he repeats those claims that go down well with the war-hungry ultranationalists.

In particular, the constant comparison to the “Great Patriotic War” (World War II) is heard by all important groups in Russia. The fairy tale of Ukraine’s threat to Russia still lingers in the minds of Russian domestic politics. According to the “ISW” researchers, Putin deliberately does not aim his speeches at the outside world, but exclusively at the inside.

Zelenskyy: “Great loss for the state”

After the death of the Ukrainian Interior Minister Denys Monastyrskyj and 13 other people in a helicopter crash, the background is still unclear. President Volodymyr Zelenskyy said in a video speech on Wednesday evening that he had commissioned the secret service to investigate. Monastyrskyj and Deputy Interior Minister Yehwhenij Jenin, who was also killed, are not politicians who “can easily be replaced”. “It’s really a great loss for the state.”

According to the latest information, a child is among the dead in the crash, which occurred on Wednesday morning in a residential area near a kindergarten near the capital Kyiv.

The Airbus H225 helicopter used is not considered particularly reliable. Against the background of the Russian war of aggression, against which Ukraine has been defending itself for almost eleven months, shooting down or sabotage was not ruled out.

According to NATO Secretary General Jens Stoltenberg, Ukraine will receive heavier weapons for the fight against Russia. From the meeting of the Ukraine contact group at the Ramstein US base in Rhineland-Palatinate on Friday, the message will go out that there will be “more ongoing support, heavier weapons and more modern weapons”. It is a fight for one’s own values ​​and democracy.

Stoltenberg left it open whether there would be announcements about the delivery of Leopard 2 tanks. It is also conceivable that the Norwegian was alluding to the fact that Great Britain wants to provide Ukraine with 14 Challenger 2 battle tanks.

According to reports, the USA is preparing new large arms deliveries to Ukraine, which is under attack from Russia. The news portal “Politico” reported, citing informed circles, that the United States is considering, among other things, the delivery of Stryker-type wheeled armored personnel carriers. Wheeled infantry fighting vehicles are used, for example, for reconnaissance and transport and are intended to offer a high level of protection against attacks. The US is not currently expected to approve deliveries of its own Abrams main battle tanks, the report said. The reason is the extensive maintenance and training on the battle tank. There was initially no official confirmation of this.

Meanwhile, Zelenskyy accused the international community of hesitating for too long. “The time that the free world needs to think is used by the terrorist state (Russia) to kill,” said the Ukrainian head of state in a video speech at the World Economic Forum in Davos. At the moment it is particularly important to anticipate Russia’s military mobilization.

Selenskyj demanded: “The supply of western battle tanks must forestall the next invasion with Russian battle tanks.” This also applies to the provision of air defense systems. These must come before the “next Russian missile attacks”.

US government concerned about maneuvers by Russia and Belarus

The US expressed concern about the joint maneuvers by Russia and Belarus. National Security Council communications director John Kirby said Belarus “clearly and demonstrably” supported Russia in attacking Ukraine. “As in the past, these exercises will be observed and monitored by us.” They are being followed “with concern”. So far, however, there are no signs that Belarus itself is planning to invade Ukraine.

The head of the Russian private army Wagner, Yevgeny Prigozhin, accused employees close to Kremlin boss Vladimir Putin in the presidential administration of treason. They are pretending to be on Putin’s course, but in reality they are disrupting the course of the war and waiting for a quick end to serve up to the US if Russia is defeated, Prigozhin claimed, according to a statement. The businessman’s troops are fighting alongside the Russian army in Ukraine. At the same time, he said that Moscow would soon comply with its demands for the YouTube video platform to be blocked.

What will be important on Thursday:

The defense ministers of several European countries will meet in Estonia ahead of new talks in Ramstein on Western military aid to Ukraine. At a meeting at the Tapa military base on Thursday, they want to present their latest aid packages for Kyiv.