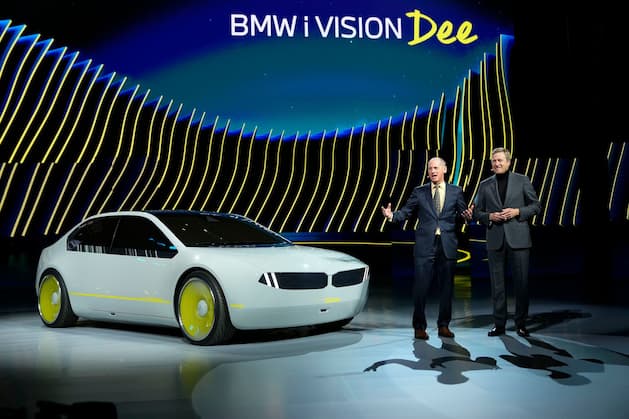 BMW promises a car with emotions, the electronics giant Sony is preparing an attack on the top dogs with a new brand name: the change in the car industry becomes tangible at the CES technology trade fair. With digitization, the car is becoming a computer on wheels – and the focus on artificial intelligence and digital services instead of horsepower determines the future.

BMW put on a lavish show at the prestigious opening presentation on the eve of CES: A short film starring Arnold Schwarzenegger and David Hasselhoff, plus the ‘Terminator’ actor and legendary Hollywood cars Herbie and KITT live on stage.

The icing on the cake was a demonstration of how a car can change color at will. A year ago, BMW showed a car clad with e-ink cells in Las Vegas, which could only switch between white and a slightly greyish black.

The real highlight of the futuristic electric sedan “BMW i Vision Dee” is in the interior. In addition to the talking software, the absence of the usual screens in the cockpit is noticeable. Instead, the entire windshield is to become a widescreen display. The speedometer, navigation system and all other information are shown on the windscreen via a head-up display. And you can choose whether only some information is displayed – or whether entire digital worlds should be mixed with the real environment.

The technology will come from 2025 in the model generation that BMW calls “New Class”, announced CEO Oliver Zipse in Las Vegas. “It’s more than a vision,” he assured. The interior of the vehicle seems spartan: There are no door handles, dashboard, temperature controls, switches, buttons. The central control element is a sensor system on the surface where the dashboard is in today’s cars. The driver decides what information he wants to see on the windscreen by speaking or waving his hand. When the car is stationary, he can hide reality with the help of dimmable windows.

The show with film and TV cars also had a deeper meaning: The VW Beetle Herbie and Hasselhoff’s intelligent sports car Kitt from the “Knight Rider” series stand for machines with feelings. Schwarzenegger, on the other hand, not only recently appeared prominently as the god Zeus in a BMW commercial, but also embodied a robot with the “Terminator”.

At Sony there was a lot less pomp shortly before. CEO Kenichiro Yoshida had a prototype rolled out quite objectively – for the third time in Las Vegas. Sony is now working on it in a joint venture with the car manufacturer Honda. And the two partners left no doubt that they mean business. In the run-up to the market launch scheduled for 2026, there is a separate brand name: Afeela.

Among other things, Sony wants to play to the strengths of artificial intelligence, entertainment and camera sensors at Afeela, said the head of Sony Honda Mobility, Yasuhide Mizuno. The new vehicle is based on the design of the two previous Sony prototypes, but is more reminiscent of a Porsche than before, for example in the rear section. The car is to have 45 cameras and other sensors, including for automated driving functions. An unusual detail is a display between the front headlights that can show information to people in front of the car.

Unlike the BMW concept, the dashboard is completely filled with screens. Sony, which is in the video game business with the Playstation and also has a music company and a Hollywood studio, wants to provide entertainment in the car.

This article was written by Andrej Sokolow and Roland Losch, dpa