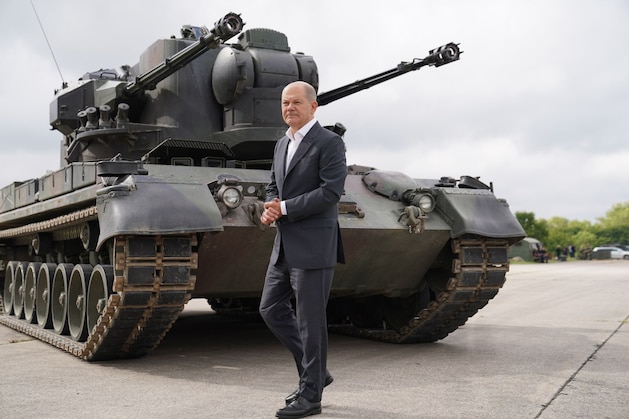 The debate about a possible delivery of battle tanks to Ukraine is coming to a head. In the centre: Olaf Scholz. His hesitant attitude is also hotly debated in the German press. Is the chancellor isolating Germany?

“Hannoversche Allgemeine Zeitung”: What remains of the current debate is the renewed impression that the chancellor would rather be driven than be the driver himself. Germany, a state with a claim to leadership in Europe, should actually lead the way and not wait for the Americans and their possible delivery of battle tanks. It would therefore be a good thing if Scholz and his new Defense Minister Boris Pistorius clarified this as soon as possible.

This includes ending the confusion surrounding Leopard main battle tank inventories. The claim that almost a year after the outbreak of war there is still no list of available equipment is as incomprehensible as it is unbelievable. It sounds like a game of hide and seek. No, Olaf Scholz does not prevent Germans from going it alone. It prevents joint European action. In doing so, he isolates Germany.

“Straubinger Tagblatt”: Olaf Scholz goes in politics, which he considers right, as far as possible. Where it is no longer possible, he finally gives in to prevent worse things from happening. The opposition and the (…) journalists in the capital interpret this as stubborn passivity that is dividing Europe. Germany is always too late. This is nonsense! At some point we will have to sit down and negotiate, says the Austrian Foreign Minister. It’s good that Olaf Scholz already knows and is considering this today.

“Neue Osnabrücker Zeitung”: In the vast majority of comments and headlines, the matter has been decided: The fact that the new Defense Minister Boris Pistorius Kyiv “still” did not promise any battle tank deliveries in Ramstein is sharply criticized and a hesitant and hesitant Chancellor Olaf Scholz is blamed. And the hundredth call by FDP woman Marie-Agnes Strack-Zimmermann to finally send Leo to the front turned into “growing pressure” from the entire traffic light government on the chancellor.

Rarely has it been so easy to garner maximum attention and loud applause with the same message over and over again – and to poison a real discussion. Because a serious discussion about the pros and cons is hardly conducted.

“Rhein-Zeitung”: Of course, Germany and its allies, above all the United States, must do their utmost to help Ukraine against the aggressor Putin. But it is also true that every new delivery of arms to Ukraine increases the risk of a direct confrontation between the blocs. The West must be prepared to take this risk. After all, it’s about not rewarding Putin’s aggression.

At the same time, NATO must not let itself be carried away, no matter how understandable the expectations of the Kiev leadership are. The debate about the leopards must therefore become more sober. What offensives are the Ukrainians capable of when they have the Leopard in large numbers? And how do the Russians escalate the war if the deliveries themselves put them on the defensive?

“Mitteldeutsche Zeitung”: While the Liberals and Greens are pushing for the delivery of Leopard battle tanks, the Social Democrats are on the brakes. The fact that the FDP defense politician Marie-Agnes Strack-Zimmermann now describes the SPD parliamentary group leader Rolf Mützenich as a “symbol of all central misconduct in German foreign policy” is a new level of escalation.

She is not the only one: Green parliamentarians also sharply criticize the chancellor and call for the delivery of battle tanks, for example in the European alliance. European countries are also getting impatient: Poland and the Baltic states. After all, they face a significantly different threat from Russia on NATO’s eastern flank.