In mid-September 2022, Iran’s “moral police” arrested Mahsa Amini in Tehran for allegedly wearing inappropriate clothing and took her to a police station, where the 22-year-old later fell into a coma. She died in a hospital three days later. Amini’s death sparked nationwide anti-government protests in Iran. The government of President Ebrahim Raisi reacted with great severity to the protests, which have been going on ever since.

The announcement to disband the “moral police” came just a day after a statement by Attorney General Mohammed Jafar Montazeri. He had publicly stated that “Parliament and the judiciary are considering” whether the law requiring women in Iran to wear a veil should be changed.

At a religious conference this Saturday, Montaseri also said: “The moral police have nothing to do with the judiciary” and had been dissolved. The Iranian news agency ISNA quoted it as saying.

“Gasht-e-Ershad,” roughly translated as “teaching patrol,” commonly known as the “moral police,” is a unit of the Iranian police force that controls Islamic dress laws. Introduced under hard-line President Mahmoud Ahmadinejad, it has been patrolling Iran’s streets since 2006.

According to Iranian law, women past puberty must cover themselves in public and wear a head covering, a so-called hijab – although the age from which the law applies is not precisely defined. At school, girls usually wear the hijab from the age of seven, but that doesn’t mean they do it in other public spaces.

Much of the social rules in Iran are based on the state’s interpretation of Islamic Sharia, which requires both women and men to dress modestly and modestly. In everyday reality, however, the actions of the “moral police” are directed primarily against women.

There are no clear rules as to what type of clothing is considered inappropriate, leaving a lot of room for interpretation. This also means that arrests of women often appear very arbitrary.

Anyone stopped by the “moral police” receives a warning or is taken to a so-called education and counseling center or a police station. There, those apprehended then have to listen to a lecture on the hijab and Islamic values. Then someone has to bring “appropriate clothing” first so that the arrested woman can be released from custody.

The Iranian government also promotes its idea of ​​Islamic clothing in schools, in the national media and at public events.

Despite this, many Iranian women have found ways to circumvent the ultra-conservative rules. Many push the boundaries by wearing tight-fitting clothing and using the headscarf as a colorful accessory that reveals a lot of hair. There are also no clear rules on how much hair can be seen on women.

A 2018 poll by the Iranian parliament found that 60 to 70 percent of Iranian women do not strictly follow Islamic dress codes in public. Iranian activists have been fighting against compulsory headscarves for decades, and some of them are currently in prison.​

Under the Raisi government, the “moral police” had increased their presence in the big cities. In response, thousands of women took to the streets without headscarves. Footage of this was shared on social media to encourage others to do the same.

One video that went viral showed a woman asking a member of the “moral police” to release her sick daughter. As a result, more and more voices were raised calling for the dissolution of this unit. For the first time, hundreds of religious women also spoke out online against being forced to wear the hijab. Even very conservative Iranians, including members of parliament, have criticized the law, as well as the “moral police,” for having a negative impact on public attitudes towards the hijab and religion in general.

Adapted from the English by Andrea Lueg

The original of this post “What is the “moral police”? ” comes from Deutsche Welle. 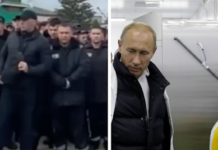 News Editor - 05/12/2022 0
In mid-September 2022, Iran's "moral police" arrested Mahsa Amini in Tehran for allegedly wearing inappropriate clothing and took her to a police station, where...