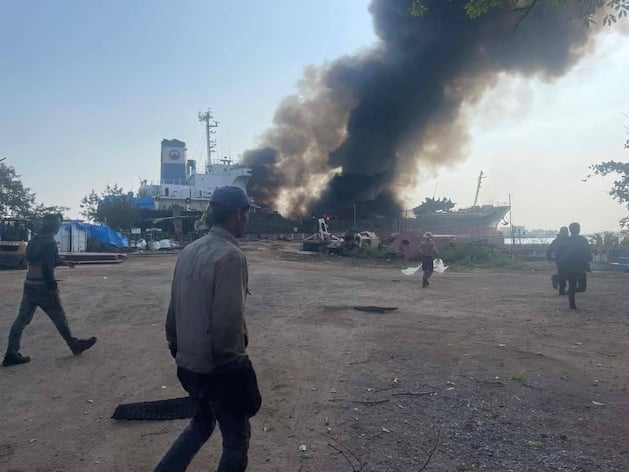 An oil tanker exploded in Thailand on Tuesday morning. Thick smoke rises over the mouth of Mae Klong in the Gulf of Thailand. At least one port worker was killed and seven others are missing.

An oil tanker exploded on the Mae Klong River in central Thailand. At least one port worker was killed and four others were injured, the Bangkok Post newspaper reported on Tuesday, citing the authorities. Seven people were still missing, it said. The accident happened in the morning (local time) during maintenance work while the ship was docked in Samut Songkhram province, the fire department said on Twitter. The Mae Klong flows into the Gulf of Thailand there. From there it is only about 70 kilometers to Bangkok.

Photos and videos on the Internet showed thick columns of smoke rising from the tanker. According to Provincial Governor Somnuk Promkaev, the “Smooth Sea 22” had loaded 25,000 liters of heating oil and 20,000 liters of diesel. At first it was said that the tanks were empty. It was initially unclear whether oil had leaked.

The explosion could be heard miles away. Windows shattered in surrounding areas. Firefighters brought the fire under control after about an hour. The authorities initiated investigations into the cause of the accident.