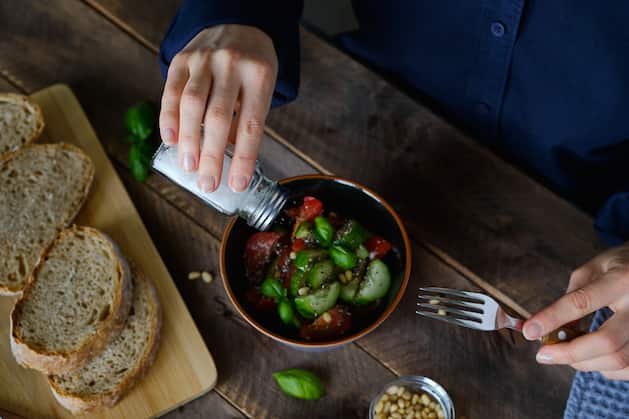 Malnutrition is now the number one cause of death worldwide and causes more deaths than any other risk factor. Oncologist Volkmar Nüssler calls for a radical rethinking and this is reflected in attitudes towards the subject of salt. What makes increased salt intake so dangerous – and how you can effectively reduce it.

“Hidden” makes it clear that the search for clues will not be easy and cannot be followed effectively in everyday life. In almost every food, especially in industrially produced ones, salt and sugar are difficult to see, they are hidden. Foods that sound healthy, such as fruit juices, yoghurt fruit mixes, pickled red cabbage or trail mix, contain a lot of sugar. The salt content in bread or rolls or sausage products is hardly apparent to consumers at first glance. Despite all this, I would like to try to analyze things clearly for you and also give you recommendations on how to avoid the sugar and salt trap.

Salt or the “white gold” has been in great demand since 10,000 BC and was even pressed into coin form in order to carry out barter transactions. In ancient Rome, officials and soldiers received salt as pay, the so-called salarium (today’s word salary – wages , Salary – was derived from it.) What was rare and expensive then is now available in abundance and you don’t have to be a medical doctor to think of hypertension (high blood pressure), kidney disease or stomach cancer more than a beneficial spice when you think of the once precious commodity ” Salt or sodium chloride, consumed in moderation, is actually very important for our organism. We need sodium to be able to transmit nerve impulses, regulate blood pressure or move our muscles. Among other things, the chloride is a component of our Stomach acid and is used for both digestion and defense against pathogens.

We need up to 500 milligrams of sodium daily to survive, with the DGE recommending an adequate daily intake of 1500 milligrams. For chloride, the recommended intake is 2300 milligrams per day. Overall, the amount of table salt that we consume daily should not exceed six grams. This equates to about a teaspoon a day. For our ancestors, the daily intake of sodium chloride was mostly covered by natural food. The success story of salt is based more on its preservative properties.

Although there are now refrigeration techniques that eliminate the need for salt for this purpose, salt consumption today averages 10 grams a day in most countries. It almost goes without saying that human physiology is poorly adapted to this. In 2017, around three million deaths worldwide were attributed to excessive salt consumption. This leads to the dubious honor that salt is now in the top three diet-related risk factors.

4 slices of bread (178 grams) or a pretzel provide an average of 2-3 grams of salt, i.e. 30-50 percent of the maximum daily amount recommended by the DGE.

As already mentioned, if we consume too much salt over a longer period of time, this can lead to high blood pressure, cardiovascular diseases and strokes, among other things. There is a clear dose-effect relationship here, which has been shown in several experiments. The lower the salt intake, the lower the blood pressure. The recommendation emerging from these studies was summarized by Het et al. 2020 in a very concise article: “These results suggest that while reducing salt intake to the World Health Organization recommended level of five grams per day has health benefits, further reduction to three grams per day is more beneficial. “

That would be half the maximum amount recommended by the DGE! This recommendation could even be lowered with age, since kidney activity often decreases with age and sodium excretion is impaired, which can lead to a further increase in blood pressure. A combination of low salt intake and a diet high in fruit, vegetables, and (low-fat) dairy products and low in red meat, saturated fat, and sweets was found to be the best measure of high blood pressure.

A somewhat older measure from Finland showed just how effective the success of reduced salt intake can be. In the late 1970s, the country implemented a salt reduction program with all sorts of campaigns to raise public awareness. Among other things, the government worked with the food industry and introduced that salt should be labeled on packaging.

Unfortunately, high salt consumption does not only affect our cardiovascular system. Among other things, the loss of calcium via the urine increases with the daily intake of salt. If we have too little calcium in the blood, this can be compensated for by increased calcium absorption from the intestine and the breakdown of bone substance by the body. As a consequence, increased salt consumption in the long term can lead to osteoporosis, i.e. bone loss.

In addition, the risk of kidney stones increases due to the increased excretion of calcium in the urine. On the other hand, it was shown that salt reduction in old age could slow down the age-related loss of calcium from the bones. The kidneys also suffer from an excess of salt: in addition to kidney stones, a high sodium intake also leads to the progression of chronic kidney diseases.

Stomach cancer, which is still one of the main causes of death worldwide, is also a major topic. According to the World Cancer Research Fund (WCRF), there is strong evidence that salty foods are a cause of stomach cancer. Cured foods and foods preserved in salt have a particularly unfavorable effect in this context. It is assumed that the salt damages the gastric mucosa and that this damage can later lead to gastric tumors. This fact is reinforced by the bacterium Helicobacter pylori, which also attacks the gastric mucosa. Regardless of the salt, this bacterium is also a cause of stomach cancer. However, when you take these two factors together, the risk increases dramatically.

There is even evidence that high salt consumption is associated with cognitive impairment, headaches and Alzheimer’s disease. However, there are few studies on this so far and more research is needed. However, the intestinal microbiome is always involved in these findings, which is why I would like to briefly go into the connection again here:

It has been shown that salt can change the composition of our gut bacteria. Considering its use as a food preservative – especially against bacterial attack – this is not a big surprise. Among other things, however, the salt activated the immune system by shifting the bacterial composition, which led to inflammatory reactions. It is possible that this inflammation, together with oxidative stress, affects the cognitive abilities of salt consumers. As I said, this research is still in its infancy, but the findings so far are very exciting.

The connection between salt consumption and obesity is somewhat better researched. High salt consumption also tends to increase the consumption of sugar-sweetened beverages, which would have provided a wonderful bridge to the next topic, sugar. However, it should also be mentioned that animal experiments indicate that salt intake could also have a direct impact on our fat metabolism and therefore increases the risk of overweight and obesity even without the additional consumption of sugar-sweetened drinks, for example.

Volkmar Nüssler was born and grew up in Dresden. He began his medical studies in his birthplace and completed them in Munich. He is a doctor specializing in cancer diseases and was Executive Coordinator of the Munich Tumor Center (TZM) from 1998 to 2022. In this capacity, he initiated the establishment of a psychosocial counseling center for cancer patients and their families in TZM in 2010. The activities of the TZM project group “Nutrition and Cancer”, in which medical and other nutrition experts work closely together, also go back to his initiative, as does the establishment of a corresponding advice center. Last but not least, these commitments have convinced him that a wholesome diet, more precisely: cooking with sustainably produced food and a community-promoting food culture, are important building blocks for a healthy lifestyle. In this sense, wholesome nutrition can also prevent cancer. Nüssler is also a co-founder of the Food association

In view of all these negative effects on our health, the impulse now seems to be to quickly ban the salt shaker from the dining table at home and to rely more on fresh herbs and spices when cooking. This makes perfect sense and I would like to explicitly encourage you to look around for alternatives to the salt shaker. The expansion of the variety of flavors alone is worth this experiment. Especially with children in the household, this is an excellent opportunity to get the little ones used to a low-salt diet right from the start.

However, the largest part of daily salt consumption is made up of processed foods, in which the large amount of salt is usually not even noticeable. Of course, many think of snacks such as pretzel sticks, roasted peanuts or chips, but bread and rolls are at the forefront when it comes to salt content, as are sausage and cheese. It becomes even more confusing with ready meals such as pizza or other frozen foods. Here the advice comes true again: only those who cook themselves know what’s in it.