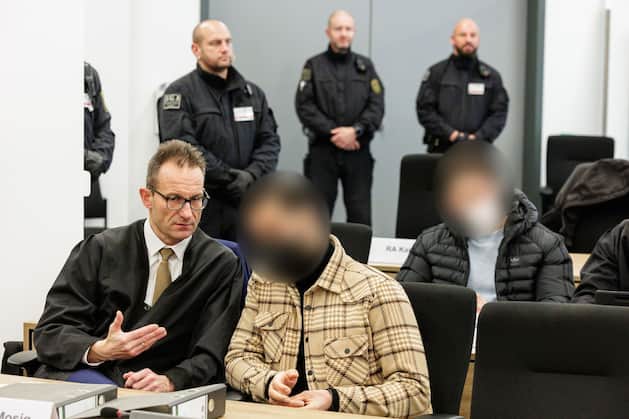 After the jewel robbery in the Green Vault, investigators suspect clan crime early on. Then they caught some of the perpetrators who are members of the Remmo clan. In the trial at the Dresden district court, the suspects are now unpacking. In doing so, they brag and mock the security measures.

The theft of jewels from the historic Green Vault Dresden was planned, prepared and executed by members of the Berlin Remmo clan. Three of the six suspects in the trial at the district court for the burglary in November 2019 confessed on Tuesday as part of a so-called deal, gave details of the spectacular coup and showed remorse.

“I wasn’t just in Dresden, I was in the rooms of the Green Vault myself,” said a 29-year-old. A 26-year-old and a 23-year-old said they had only been “smear” – at the level house and the residential palace. The 29-year-old’s order was to climb through the previously prepared window with a non-accused person, smash the showcase in the jewel room and steal pieces of jewelery “because I’m strong and ready to do it,” said the oldest accused. According to his own statements, he was not involved in the original planning of the crime. He had been approached two to three months earlier if he wanted to take part. “The idea wasn’t mine.”

According to him and the 23-year-old, it arose from the enthusiasm of “another person” from a class trip to the Green Vault and the Green Diamond exhibited there. The plan was developed over a year. “I’m the one with the flashlight, the other one told me where to go,” said the 29-year-old. With the statement, he revised his statement from March 2022. His contribution to the crime was “significantly more important” than stated at the time. That’s how he was I also took part in two of the exploratory tours to Dresden in preparation: “I was surprised that one could move around so freely and unnoticed and that nobody noticed”.

The burglary was a “real adventure” for him, said the 23-year-old. He wanted to prove himself to others and be the center of attention. “I didn’t think about the consequences.” It was only in the course of the process that he realized the importance of the jewels. “I’ve done everything I can to bring back the jewels that I had control over.”

A 26-year-old confessed to having set fire to the power distributor for the old town. He claims to have participated in order to finance his drug use and also said he was “cooked up” on the day of the crime. He now regrets the act very much and is glad that at least part of the loot was returned, he explained.

Shortly before Christmas, most of the jewelry was returned through a lawyer for the 29-year-old. Four of the six accused agreed to the agreement reached a week ago about a milder sentence, a fifth did not. The prerequisite for this are “credible confessions” including questioning. One of the six accused denies involvement with reference to an alibi.

The Germans, brothers and cousins, have had to answer for serious gang theft, arson and particularly serious arson since the end of January 2022. Two of them are currently serving their youth sentences for stealing the 100-kilo gold coin from Berlin’s Bode Museum in 2017. The break-in into the famous Saxon Treasury Museum on November 25, 2019 was one of the most spectacular art thefts in Germany.

The trial will continue on Friday – with the explanation of the fourth defendant and questioning.