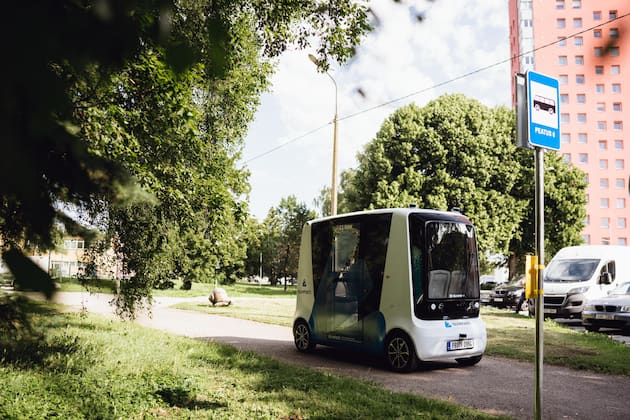 In the Estonian capital of Tallinn, autonomous minibuses are already driving on public roads. The startup Auvetech now wants to bring them to Germany. FOCUS online has looked around on site.

“There are too many cars in the city,” says Mari-Ly Klaats. She is COO of the startup Auvetech from Tallinn. Only around 435,000 people live in the Estonian capital. But: The city stretches over a large area on the Baltic Sea coast, the distances from the outer parts of the city to the city center are long. Buses and trams don’t go everywhere. For many residents, a car is the means of choice.

Auvetech would like to counteract this. The company, which was only founded in 2019, has developed a self-driving car. MiCa is the name of the latest variant presented in November. Eight passengers have space here. An electric motor drives the vehicle for six hours before it has to be plugged in.

However, MiCa is not intended as a taxi, but as a supplement to buses and trains. The minivan is intended to connect remote suburbs to the nearest bus stop. “We want to be the last mile to public transport,” says Klaats. MiCa can be used where a regular bus route or the expansion of the railway is not worthwhile – or where the streets are too narrow. MiCa measures just one and a half meters wide, but is high enough for passengers to be able to move around in it while standing.

It then crosses the street at a maximum of 20 kilometers per hour. Currently, for legal reasons, a kind of conductor has to accompany the vehicle, but later the vehicle will only be monitored by cameras from a control center. This saves transport companies a lot of money. According to Auvetech, a driver in the control center can monitor up to ten vehicles. From there, he can also control or stop them manually in an emergency if he detects damage to the vehicle. In the next generation, the on-board computer should also recognize the latter.

Finding the way for the self-driving car is a bit complicated. MiCa cannot orient itself solely using Google Maps or similar map services. Instead, Auvetech first has to create a 3D model of the area in which a vehicle is to be used – if necessary, an entire city. The car then navigates on its own in this digital image of the city. Sensors and cameras ensure that it recognizes and circles around obstacles and other road users.

The technology has a price: Auvetech is asking around 200,000 euros for a second-generation vehicle. Klaats points out that this price is to be halved in the coming years and is already significantly cheaper than comparable providers, but passengers will also have to pay part of it. Although ticket design is the responsibility of the transport companies that will ultimately use the autonomous cars, Auvetech expects fares that, calculated per kilometer, will be somewhere between public transport and your own car.

But it should be worthwhile for transport companies. “They save a lot of money because they need fewer drivers,” says Klaats. After all, one employee is enough for ten cars. And in general, “bus drivers are already missing in most cities,” says the Estonian. She is right about that: According to the Federal Association of German Bus Companies, there are currently 5,000 vacancies. There is also a lack of drivers for trams and subways.

It will be a while before Auvetech’s autonomous cars become widespread. The small Estonian company has only produced 13 vehicles so far, which are used in 12 countries. The first contacts abroad were the Scandinavian countries Norway, Sweden and Denmark, soon the first MiCa will be delivered to Belgium. AuveTech can build around 20 cars per year itself. For mass production from 2025, the start-up is currently looking for production partners, ideally in the countries where the cars will then also be used.

Germany would offer itself there with its car industry, but the road to the German market is rocky. “German laws are a bit more complicated,” says Klaats cautiously. Road traffic law for autonomous cars was amended in Germany in 2017 and then expanded in 2021. Theoretically, level 4 autonomous cars – including Auvetech’s minibuses – can also drive on public roads. However, the law provides for a number of technical and organizational conditions before an autonomous car is actually released on the road. Insurance also has its pitfalls. “Basically, our cars are treated like normal cars,” says Klaats. In individual cases, however, Auvetech works with Estonian insurance companies, which also organize protection abroad.

In 2023, the northern European company also wants to expand in Germany. She is currently looking for partners. The first MiCas should probably not drive in German cities, but on private property. Deutsche Telekom and Deutsche Bahn have expressed an interest in using autonomous cars on their company premises. Airports would also be an interesting location. The minibuses could distribute both employees and goods over large areas. Perhaps you will get into one of these cars first here too. They would also be suitable as shuttle buses for passengers at major airports.

However, you will not see the self-driving buses outside of such private operational areas and large cities. On paper, such solutions would be perfect for connecting rural areas, where tightly scheduled lines are simply not economically viable today, but first of all, the autonomous minibuses are too slow for long distances at 20 kilometers per hour and, at 200,000 euros each, also too expensive. “It doesn’t pay off,” says Klaats.

So far, Auvetech has hardly had any competition in Germany. There are numerous pilot projects, for example in Berlin on public roads and on the Charité clinic grounds with autonomous minibuses, but so far no provider has established itself for regular operation. Federal Transport Minister Volker Wissing (FDP) wants to step on the gas. Only in May was a law approved that allows the use of autonomous minibuses under certain circumstances. “We have to secure technological leadership in the automotive sector in Germany,” says the minister. However, the first vehicles for this could come from abroad.

All electric car and plug-in hybrid models at a glance