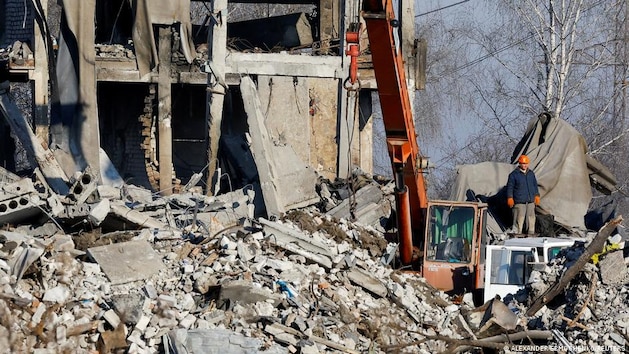 Not only after the death of 63 Russian soldiers in a single Ukrainian attack did right-wing pro-Russian war bloggers rant about the incompetence of the Russian army. The so-called milbloggers mainly use the news platform Telegram to express their anger.

A post on Gray Zone, a Telegram channel associated with entrepreneur and Putin confidant Yevgeny Prigozhin’s private military company Gruppe Wagner, said: “As was to be expected, it started after the events in Makiivka to blame the soldiers themselves. Eventually, they turned on their phones and were discovered. Of course, the enemy has these opportunities and sometimes he uses them. But in this case, it’s 99 percent a lie and an attempt to deny any blame.”

Russian generals are fundamentally resistant to advice, says Igor Girkin, a Russian ex-spy and self-proclaimed nationalist who was convicted of mass murder by a Dutch court in November 2022 for his part in the downing of the Malaysian MH17 passenger plane over eastern Ukraine in 2014.

Girkin writes on his Telegram channel that the building in which the soldiers were housed was completely destroyed because it was also used as an ammunition store.

Boris Roshin, right-wing milblogger and author of the Colonelcassad chat, criticizes that many military personnel are stationed within range of Ukrainian artillery. The army has adapted its strategy to the circumstances in recent months in order to no longer store large quantities of ammunition and fuel in one place.

However, according to Roschin, this does not apply to humans. The Russian military leadership is responsible for this: “Incompetence and the inability to understand the consequences of a war are still a serious problem.”

Harsh criticism of how the Russian military is botching up the war in the eyes of Russian nationalists is nothing new in itself. Pro-Russian war bloggers have been vocal for months. But the recent spate of outrage at the Defense Ministry in Moscow raises the question of why such criticism is tolerated in an increasingly authoritarian Russia.

Bloggers who support the war are free to express their opinions. Opponents of the war face up to 15 years in prison for crimes such as “discrediting the Russian armed forces” or spreading “false information” about the Russian military and its activities.

It depends on the direction of the criticism, explains Abbas Galliamov, political analyst and former speechwriter for Russian President Vladimir Putin: “War bloggers criticize from the so-called patriotic perspective: they don’t attack Putin, they attack the executors. But they don’t question either Putin’s leadership or his idea of ​​invading Ukraine.” However, Gallyamov believes that questioning his leadership and the war itself is not allowed, and anyone who does so will be seen as an “enemy”.

However, Igor Girkin, one of the most prominent critics of the Russian military, has also directly criticized Putin himself several times. In a 90-minute video on Telegram in December, Girkin said the fish’s head was completely rotted.

British historian and Russia expert Mark Galeotti says Moscow is increasingly realizing that it cannot completely control the narrative. Galeotti explains that people like Girkin are, in a way, spokesmen for fairly important factions within the military and security apparatus.

One fears that if one oppresses them, they will become martyrs. In addition, you no longer have the opportunity to get a feeling for what exactly your concern is.

Abbas Galliamov says Putin is also dissatisfied with his military leaders. “They promised him victory in three days, instead he made a fool of himself in front of the whole world.” On an emotional level, Putin even understands the war bloggers, according to the Russian political analyst.

With a view to the power struggles within the leadership, the criticism is probably also politically motivated. According to Galeotti, by no means all the military are united behind Defense Minister Sergei Shoigu and Chief of Staff Valery Gerasimov; it could well be that these men would have to step down this year. “What we see on social media reflects a lot of real politics in Russia,” said the British historian.

Translated from the English by Dagmar Breitenbach.