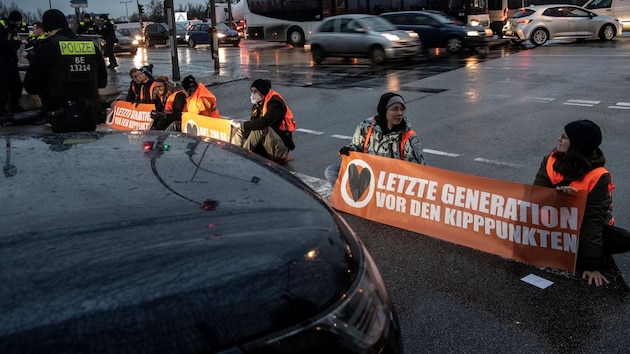 They stick themselves to the streets, occupy airports or soil art objects: the protest group of the “Last Generation” is now known throughout Germany. According to a report by “Welt am Sonntag”, the group advertises specifically with young people with employment contracts and salaries.

What began as a fight against food waste is now life-giving for activists from the Last Generation group. With protest actions on the streets, in museums or in front of political institutions, they are demanding drastic measures against climate change. Anyone can take part, but not everyone can afford it. Apparently not a problem, because the group specifically recruits young activists “full-time, part-time or on a 520-euro basis”, as “Welt am Sonntag” reports.

Accordingly, the activists ensure their offspring targeted jobs that are subject to social security contributions – up to 1300 euros a month are possible. “Fortunately, we have this money available and can pay people, and we have the opportunity to hire people as well,” Welt quoted a recruiter from the group at an informational event.

According to the research, the money comes from a Berlin association called “Wandelbündnis”, which is also supposed to issue the employment contracts. When asked by “Welt am Sonntag” it was said that “30 paid staff” were currently employed in the “Non-profit educational work to support the last generation” initiative. They would not receive any money from the activists for this.

Rather, the generous support comes from major donors in the USA, more precisely the so-called “Climate Emergency Fund”. Philanthropists like oil heiress Aileen Getty donate parts of their wealth there. The last generation draws “a lot of money from the fund,” the activist recruiter is quoted as saying in the report.

With texts like “You get BAföG and just need a little more money? Do you want to work full-time for the last generation and have no other source of income? There is an opportunity for everything” specifically recruits young people who want to spend their time in activism. In what is known as the “payment introductory evening”, the group then tries to bind interested parties more closely.

For the Berlin Senator for the Interior, Iris Spranger (SPD), the fact that even activists are now being paid for their work shows the high degree of professionalism in the climate protection movement. “This is about a comprehensively organized association of people who commit crimes in order to achieve their political goals,” Spranger is quoted as saying by the newspaper. Fines imposed by courts have already been covered by payments from donations.

Spranger therefore calls for climate activists to be punished more severely for their protest actions if they break the law. In an interview with the “Berliner Morgenpost” she spoke out in favor of a fine of 2000 euros.

The climate protection activists, on the other hand, argue in court with a judgment of the Federal Constitutional Court. Accordingly, when it comes to climate protection, politicians are obliged to respect and protect the rights of future generations. A Berlin judge ruled in October that the climate crisis was an “objectively urgent situation” and “scientifically undeniable”. penalty order denied. But mostly such objections are unsuccessful for the activists.

A prominent example is currently “Last Generation” spokeswoman Carla Hinrichs: the activist has to pay 1,800 euros because she got stuck on the street in Frankfurt am Main on April 12. She also lives on donations. Hinrichs appealed against the penalty order – who ultimately pays for the money remains open.