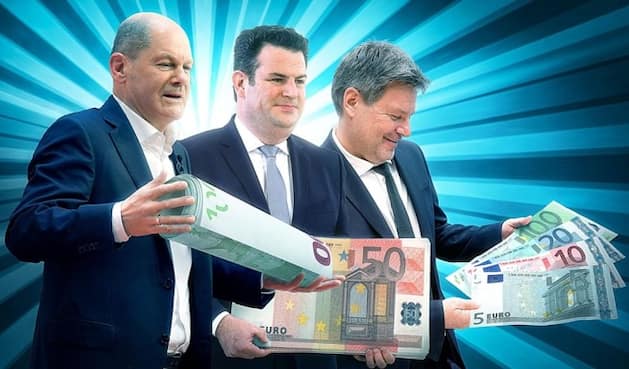 The gulf between words and deeds is wider than the Grand Canyon in this traffic light coalition. If you wanted to walk through the valley of empty promises, you would have to be prepared for an exhausting multi-day tour. At least six stages would have to be mastered.

Stage 1: The promise on climate policy sounds great. They want to phase out fossil fuels in order to move CO2 emissions towards zero. gosh! Germany wants to demonstrate to the whole world that it is possible to run a flourishing economy without the climate killer.

And then this: as soon as an important supplier of natural gas fails, the government panics and buys fossil fuels from all over the world, reactivates three coal-fired power plants, builds liquid gas terminals and uses police force to open a new lignite open-cast mine. No wonder: CO2 emissions are increasing and renewables are staying where they are: in the niche.

Stage 2: The “mobility turnaround” is writ large in the coalition agreement. After years of traffic jams, smog and an unreliable train, the audience is looking forward to it.

Only in everyday life in the country does one look in vain for this turning point. The railway is the only thing that has changed, but unfortunately not to their advantage. The entire management is ranked in reverse. The minister watches from the saloon car.

Electromobility requires an infrastructure of power lines and charging stations that will not be functional at the current rate of expansion even in 100 years. According to the Federal Network Agency, there are currently around 70,000 charging stations in Germany. By 2030 it should be one million. In order to achieve that, the pace of expansion would have to increase fivefold, says the Association of the Automotive Industry.

Stage 3: The declaration of intent regarding housing construction sounds like the solution to all problems: the chancellor himself promises 400,000 new apartments, 100,000 of them in social housing. Olaf Scholz when presenting this goal: “You should measure it by your actions.”

When looking at the construction statistics, the big goal can no longer be recognized as a trace element: Around 280,000 apartments were built in 2022. There is a shortage of 700,000 apartments in the Federal Republic. Incoming orders fell by 14 percent.

No wonder: There are a lot of bureaucrats and lobbyists in the “Alliance for Affordable Housing” – a Scholz idea – but not a single construction investor. People like Vonovia boss Rolf Buch are missing from the list.

The government sees the real estate market as a playground for sharks, driving away those who might solve their problem. The scarcity is growing and rents are rising – in Berlin by over 100 percent, in Munich by over 60 and in Kassel by over 50 percent in the past ten years.

Stage 4: Labor Minister Hubertus Heil promises almost every working day: Germany will now become a modern immigration country. Migration is intended to combat the shortage of skilled workers in Germany. Because the fact is: Around 400,000 additional workers per year will be needed if the baby boomers gradually say goodbye to retirement.

But the government does not manage to bring supply and demand together in Germany’s highly regulated labor market. Although around 35 percent of all people with a migration background over the age of 15 have not completed school or vocational training, as figures from the Federal Statistical Office show, there are 1.3 million vacancies even in this lowest segment of the labor market.

In 2021, 65 percent of all Syrians and 43.7 percent of all Afghans who come to Germany appear in the unemployment and not in the labor force statistics of the Federal Employment Agency.

The Federal Agency calculated an unemployment rate of 14.7 percent for foreigners in December 2022, compared to just 3.9 percent for German nationals. Immigration into the social systems works noticeably better than that into the labor market.

Stage 5: Germany will become an educational republic, according to the coalition agreement. Every third-class politician has the sentence in his speech manuscripts: The gold of this country is in the heads of our children. You like to gossip.

The truth is that the education system is in dire need. 100 billion euros for the Bundeswehr were activated within a few days. The schools receive a five billion digitization subsidy as part of the “DigitalPakt Schule”. Otherwise, the eternal Cretaceous period prevails.

The shortage of teachers in Germany is getting worse.

Stage 6: In the coalition agreement, the ambition of financial policy was right: Germany should continue to live up to its pioneering role in Europe as an anchor of stability, it says there.

“Financial solidity and the economical use of tax money are principles of our financial policy.”

But no sooner was the ink dry than the biggest debt rocket ever launched by a federal government. If you compare the current level of debt with the red-green coalition under Gerhard Schröder, that means an increase of 53 percent or over 800 billion euros. This is a new Germany record. The promised stability anchor has broken loose and is dragging across the seabed.

Conclusion: Not only people, but also words can be abducted. The word “progress” is a word kidnapped by the self-proclaimed progressive coalition of FDP, Greens and Social Democrats. It cries out for its liberation.