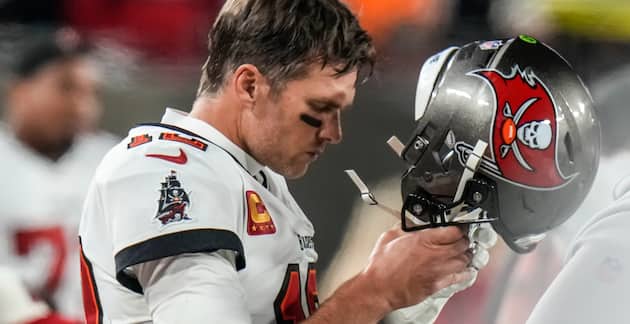 Tom Brady flies his Buccaneers out of the NFL playoffs after a significant defeat against Dallas. What’s next for the 45-year-old NFL icon? Should Brady continue his career, he has five options.

How is he doing now? After the clear defeat in the first round of the NFL playoffs, Tom Brady avoids a statement about his future. “I’m going home and trying to sleep as well as possible tonight,” said the 45-year-old after his Tampa Bay Buccaneers’ 14:31 against the Dallas Cowboys. Brady: “There was a lot of focus on this game. One day at a time really.”

As Brady said goodbye after the season ended, he said, “I love this organization and it’s a great place.”

A year ago, the most successful NFL player in history with seven Super Bowl victories announced his retirement, but changed his mind after 40 days and decided to return.

Now Brady will go into the season break as a contractless player. The NFL icon has several options. Extend, change teams, resign, switch to TV as an expert? Should Brady continue his career, it seems he currently has five options as these teams need a new quarterback:

Derek Carr will leave the Raiders next season and Jarrett Stidham will become a free agent. That should spark a lot of interest in Brady, who worked with Raiders coach Josh McDaniels as offensive coordinator for many years with the New England Patriots.

Las Vegas has a lot of potential on offense. Davante Adams, Hunter Renfrow and Darren Waller would benefit from the presence and experience of a Tom Brady. If the Raiders retain free agent Josh Jacobs, the race for Brady could be exciting. A transfer would make Vegas the title contender in the AFC.

Of course, it would be completely insane for Brady to sign with his former arch-rivals, the Jets. Their fans would probably have something against it, too. But it seems that passer Zach Wilson there is already done with his time in the Big Apple.

Replacement quarterback Mike White is also set to become a free agent. Brady knows the AFC East like no other. The Jets have some fine young offensive talent, including Breece Hall, Garrett Wilson and Elijah Moore. Brady’s presence would help them all.

The Colts are in chaos right now – from a vacated head coaching spot to a disastrous quarterback position. Brady’s signing would re-establish Indianapolis as a top team in the AFC South. Brady’s presence in the middle would also be good for Jonathan Taylor, Michael Pittman, Parris Campbell (if he stays) and Alec Pierce.

The Seahawks will likely retain free agent Geno Smith, who led Seattle to the playoffs. But what if Seattle decides to make a splash and bring in Brady?

Brady’s current club would also be an option. However, the team has recently weakened significantly in key positions and the likelihood that Brady would play for the title again in Florida would be very low. Brady had nearly 4,700 rushing yards for 26 total touchdowns this season and finished 12th overall at quarterbacks.

The original of this article “After a bitter playoff exit, Tom Brady has five options in the NFL” comes from Sports Illustrated Germany.